Clearance of a vessel to a foreign port.

There are to certify, all whom it doth Concern, that Hugh McIntyre (Master or Commander) of the Str. Ongiara (burden) 54 tons, or thereabouts, navigated with 5 Men, British built and bound for Queenston Ont. having on board Passagengers and baggage hath here Entered and Cleared his said Vessel according to law.

Given under my hand and seal, at the Custom House of Lewiston, N.Y. this 24th day of June one thousand eight hundred and ninety four and in the 119 year of the Independence of the United States of America. 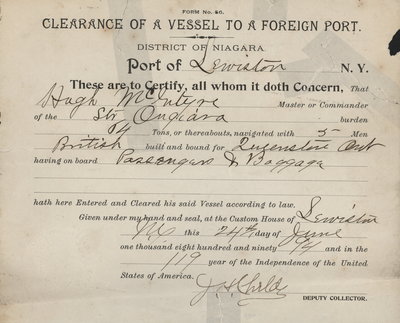