16. Presentation of Laura Secord books to the above students by Mr. A.R. Petrie, Superintendent for Operations

and Mr. J. Bassett, Consultant of Communications who are co-authors of the recent book.

19. Skit presented by pupils of the school.

Very Seldom in past history has a Woman been directly connected in the victory of a battle. This Lady was non other than LAURA Ingersoll Secord.

On June 24, 1813, with courage and determination, she set out on her long and dangerous trek to Beaver Dams to warn Lieutenant James Fitzgibbbon of the approaching American soldiers. Indeed it is probable that Canada, owed her a debt that could never he repaid as she faced many dangers in carrying the message which was so important to her country's safety. In honour of Laura Secord and the great deed performed, it was most appropriate that this school was named in her honour.

It was back in 1844 when Queenston- a thriving place, reputed to have thirteen hotels, four liquor stores and a shoe factory that the Old Stone School having two classrooms and an enrolment of 120 pupils was built on the north-east corner of the present school grounds.

In 1842, the District Municipal Act saw Niagara Township divided into eleven school districts or sections. Queenston became known as S.S. #4. An assessment of £40 was raised to be applied to the payment for teacher's wages.

Early in the century, the old stone school was considered to be antiquated. It was decided that a new and more modern school be built. The architect's plan called for a fine red brick structure with two larger cloakrooms within each of the classrooms, a library, teacher's room, pressure water fountains, indoor lavatories and a basement playroom.

The Queenston Women's Institute organized in 1908, was advocating the building of a hall as a suitable memorial to Queenston's heroine. With the $3000 which the Institute raised and a generous donation of $3000 from Mr. J. D. Larkin, the basement playroom developed into a large community hall with a stage and a kitchen.

The cornerstone was laid in 1914 but it wasn't until Sep. 18, 1915 that the school was formally opened and dedicated. Mr. Charles R. Kilkenny, the former principal of the old school remained with the new school until 1918 when Miss. Hazel. A. Corman became principal until 1953.

Many changes have since taken place.

In 1920-21, the Queenston generating station, being then constructed, increased the school population resulting in a cloakroom and a part of the hall being created into a third room.

On October 16, 1923, a bronze plaque was placed on the front of the school in loving memory of Laura Ingersoll Secord. A ladies' parlour and washroom were added to the auditorium. Electric lights replaced the formal oil lamps in 1921.

In 1949 an increase of enrolment was evident what with the building of the Sri Adam Beck power plant necessitating utilizing the stage for the auditorium as another classroom.

In 1952, the enrolment was 152 students and it was then decided to build a new wing. While this was being constructed, a section of the auditorium was partitioned for a fourth classroom.

On March 16, 1953 the new wing consisting of two school rooms, a hallway and a teacher's room was formally opened and dedicated. Later, another room was added.

Although a number of township schools had united forming an Area Board of Education, Queenston chose to remain independent. Later, Laura Secord School was incorporated into Niagara Township School Area #1.

In January 1969, all existing school boards in Lincoln County were amalgamated. Thus Laura Secord School was placed under the jurisdiction of the Lincoln County Board of Education.

Today, what with a declining school population, three classrooms comprising of grades 4-6 are in use with a present enrollment of 95 pupils. The other two existing classrooms have been put to efficient use what with the organization of an Art and Project room upstairs and a Library Resource Centre downstairs. What was once a principal’s office located upstairs is now used as an instructional area for a small groups of students and a storage area for books. What was once a library located off the auditorium now serves as our Mini Workshop.

As we reflect on the past which is now history, an outstanding feature of this school has been the fine spirit, co-operation, dedication and contributions made among the pupils, parents , staff and the community.

This list has been prepared to the best of available information. 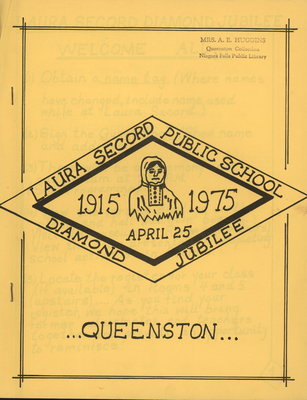