NIAGARA-ON-THE-LAKE - A love of contrasts during the Victorian era is still visible today, at a house at the corner of Creek and Warner roads.

Though the passage of time has brought many changes to the property, the name Woodruff has remained on the ownership documents for 1 1/2 centuries.

With a name readily associated with the village's founding, the Woodruff family became synonymous with prosperous farming and trade throughout the 19th century.

Now — five generations after brothers Richard and William set out to succeed — Bruce Woodruff is following tradition in one of the three houses built by his ancestors.

A few hundred feet from Richard's grand York Road home — still standing and recently restored by the Rigby family — Woodbourne House attests to the contrasting tastes of the Georgian and Victorian eras.

The original house was one of two built by William Woodruff, Bruce's great-great-grandfather, in 1839.

The two-storey, symmetrical Georgian-style structure suited the needs of the growing farm and merchant family until a small back wing and coal shed was added around 1860.

However, with the increased success in farming, son Henry added an elaborate two-storey Victorian wing, complete with high ceilings and ornate detail, in 1880.

After leaving, Bruce intended to return, but a career in college teaching, and starting a family in the Hamilton area temporarily side-tracked him for a few decades.

"I always knew I'd come back to the house and knew of its importance because my father always told me about it," Bruce says, sitting among family antiques in the fully-restored Georgian wing.

His father, Major Wilfrid Adams Woodruff, a veteran of the First and Second World Wars, spent his retirement years researching and documenting the history of St. Davids with his cousin Paul, a descendant of Richard Woodruff.

So nearly a decade ago, Bruce's family started a weekend commute from Smithville to bring the overgrown and nearly-neglected 3.5-acre (1.4-hectare) property back into shape.

He had the entire house designated for protection under the Ontario Heritage Act, but began work mostly on the land and in the parts of the house not occupied by renters.

However, the need to purchase came abruptly in December 1991.

"It had to be restored or condemned," he says, pointing to photographs showing the rotted foundation beams no longer able to support the buildings.

So, skilled workers installed the proper concrete foundation and helped restore the Georgian side as a home for the family of four.

Besides creating space for the amenities of heating and plumbing, aesthetic details were also polished inside and out.

A seminar on restoration at Dundurn Castle gave Bruce direction, but little needed really changing since there was little modernization, he says.

A 1915 photograph — taken from Creek Road and facing the house — has also proved invaluable.

" The mason used a magnifying glass to examine the chimney and was then able to duplicate the brickwork."

Soon, they hope to reconstruct the Victorian porch using plans drawn from the photograph, and re-paint the exterior according to the original pale color.

"My father painted the house red, like the color they used to use for old barn and out buildings — he just liked the color I guess," Bruce says.

Now, within a month of retiring from 26 years of teaching at Mohawk College, the vision has been set to bring another part of the contrast into focus — restoration of the unoccupied Victorian wing.

The once grand ballroom or drawing room, where elegant dances and parties were reputed to take place, catches only a hint of its original glamor right now since it's used only for storage.

However, the walls and ceiling, the mouldings and designs, including the red stained glass on the front doorcase, need little more than a face-lift in most cases.

The back dining room on the main floor already gleams in white with deep purple accents — attesting to the Victorian boldness in decoration.

"I've given myself four years. The determining factors are time and money of course, but that will also depend on the stock market," he says of his investments.

His schedule may also have something to do with the interests of children, daughters Elizabeth, 13, and Catherine, 10, and wife Gloria, who with friends have assisted in all stages of the restoration.

"Anyone who lives here develops a strong protective feeling for the house," he says, adding one daughter has already expressed an interest in continuing the Woodruff family legacy at Woodbourne.

Part of that legacy will be recalling the old stories, including the one about William Lyon Mackenzie, the mid-1800s reformer who led the Rebellion of 1837 against the Family Compact. After fleeing Toronto, he was hidden in Woodbourne and then narrowly escaped detection by climbing out a second-storey window and down a massive horse chestnut tree.

Although not admitting to seeing any ancestral ghosts, Bruce says he can't help but feel their presence — and knows they're happy with what he's doing. 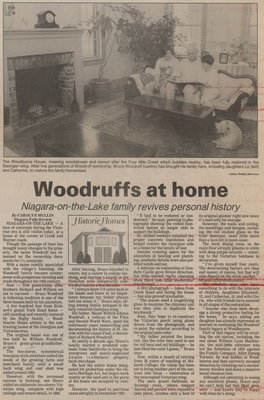