Notes
The building is located at 15284, Niagara River Parkway, Niagara-on-the-Lake, Ontario.
Historical plaque reads:
"THE FIELD HOUSE
One of the oldest brick houses in Ontario, this handsome Georgian structure was built about 1800. Originally a farm house, it was the home of Gilbert Field (1765-1815), a United Empire Loyalist who was in possession of the land by 1790. During the War of 1812 the house was used by British forces and was subjected to a brief bombardment from an American battery. Thought damaged it was one of few houses in the area to survive the hostilities. It remained in the Field family until about 1925, after which it passed through various hands. In 1968 the Ontario Heritage Foundation acquired the property to ensure its continued preservation and twelve years later the Field House was returned to private ownership with a projective covenant.
Erected by the Ontario Heritage Foundation,
Minister of Culture and Communications"
Publisher
Ontario Heritage Foundation
Date of Publication
9 Dec 1970
Dimensions
Width: 17.8 cm
Height: 21.5 cm

We are fortunate to have a considerable body of documentary evidence about the Field House, which stands today on the "River Road" midway between Queenston and Niagara-on-the-Lake. This was originally a three-storey brick house, Georgian in design, built about 1800 for Gilbert Field. At the end of the war of American Independence, the family had come as United Empire Loyalists from New Jersey, and his father had established a blacksmith shop and wagon-making business in Queenston.

A centre hallway, from which the main staircase rose to the second floor, divided the house in half. Immediately to the left was a small room, used perhaps as an office or study. Behind it lay the "keeping room", a place where the family lived, cooked, and ate. The immense cooking fireplace is still intact, and beside it the bake oven, possibly an early addition. On the inside wall of the livingroom the servants' staircase led to the second floor. On the opposite side of the hall the "best parlour", now the diningroom, occupied the front of the house, and a bedchamber was at the rear. Upstairs, the wall beside the present staircase separated the house into two suites of rooms, those over the keeping room for the servants, and the other bedrooms for the family.

During the War of 1812, both friend and foe made use of the Field House. A month before the battle of Queenston Heights, General Brock rented it as a barracks. On the morning of that battle, it was struck by five cannonballs fired across the Niagara River. When the Americans invaded Upper Canada, they in turn occupied Field House. Gilbert's son Daniel was employed with his father's team when our forces retreated to Burlington Heights, and on his return in November 1813 was captured at the house by a party of Americans from Fort George. At the end of the war a sizable claim for rent, damages, looting, and firewood was put forward by Gilbert Field's widow. Two of the documents relating to the fortunes of the Field House during that war are reproduced here through the courtesy of the Dominion Archives.

This is one of the few houses of this area which survived the War of 1812. Several examples of the early trim are still present, very typical of the late 18th century and the period before that war. These include the simple bold mouldings which adorn some of the doors and windows, notably in the livingroom, and the very fine mantelpiece in the northeast bedroom. Much of the other older work appears to be after the war, possibly installed when the house was refurbished. At a later date the roof, which was said originally to have had a steeper pitch, was burnt and rebuilt in the very much lower shape now seen.

Daniel Field, his brothers, and his neighbours, the Browns and the Vroomans, lie buried in the Field Cemetery about two hundred yards south of the house. The Fields continued to live here till about 1925, when a death in the family led to the sale of the house. By that time the main fireplace and the bake oven had been covered up, and the house was heated by stoves. A partition below the main beam of the livingroom divided that side of the lower floor into a kitchen and a diningroom of equal size. The servants' staircase on the livingroom wall was still in use, however.

During the succeeding years the Field House passed through various hands. Less than a decade ago it had fallen into a very poor state of repair and was threatened with demolition. In June 1961 Judge Robert J. Cudney purchased the property and began its restoration. It was he who saw to the sympathetic additions and changes, including the porch and ornamental cornice, and carried out some internal improvements as well as essential repairs. New livingroom and kitchen mantelpieces and the stair balustrade were designed, to be in keeping with the character of the original house.

In 1968 the Field House was acquired by the Ontario Heritage Foundation, an agency established by the provincial government to encourage the preservation of buildings of historical and architectural value. It is now occupied by Mr. and Mrs. John L. Field and family. During local house tours, usually in June, Field House is open to the public. 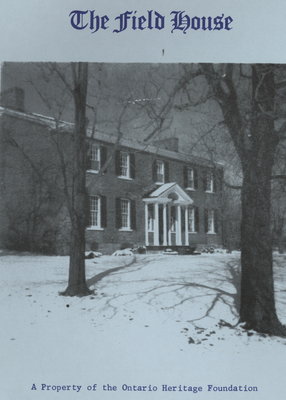