C. R. Kilkenny
Born in Bradford, Ontario May 15, 1862.
Received his teacher's certificate from Toronto Normal School in 1880.
In 1891 he settled in Queenston and taught there until June 1918.
Married Miss Caroline Dressel - daughter of the owner of the Dressel Hotel (later became West Landing Hotel). After retiring from teaching, operated a small grocery store in the corner of the hotel- and had built his home (still standing) across the "Gorge route" track to the Queenston-Lewiston Bridge from the store).
Two sons.
Fred who did reside (don't know if he still is) in Niagara Falls, N.Y. - two children John and Karen.
Jack (older) now deceased. Son Robert was known athlete of Stamford Collegiate.
Not sure of C. R. Kilkenny's death - maybe early fifties. In a write up Eighty years or more - Review June 10, 1950 he was 88 on May 15, 1950.
I don't know when a school called the Red Brick school was built - on the river side of the Parkway - opposite the "Lower" Larkin Farm - not sure when it was torn down- but may in late twenties.
The old stone school (as it was later called) was built about 1841 - on the north east corner of the present school property. At present I am unable to locate pictures I have of it, taken from a painting made by the late C. R. Kilkenny, teacher there from 1891 to June 1918. This school was used for many meetings - Queenston Methodists, possibly by Anglican and perhaps the Women's Institute. 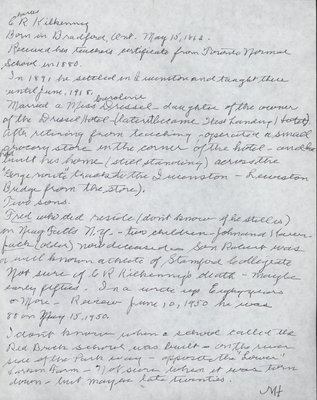