Home (Advanced) → What's New → Details
Books that made a difference


Books continue to make a difference in people's lives. To celebrate the importance of books during Ontario Public Library Week, October 19-25, 1987, librarians asked prominent Ontarians to answer two questions, "Do you recall one book that has changed your life? Is there one book that has influenced you the most?
According to author Margaret Atwood, 'Grimm's Fairy Tales' had the greatest influence on her. As a young girl living in a remote area of Northern Quebec, her parents ordered a copy by mail.


"I am always a little astonished when I hear Grimm's denounced as sexist," she said. "They probably mean the anthologies that concentrate on The Sleeping Beauty, Cinderella and Little Red Riding Hood and leave out everything else."


Atwood explained that in the version of Grimm's she grew up with, sex roles were sometimes reversed. "There are a good many forgetful or imprisoned princes who have to be rescued by clever, brave and resourceful princesses, who are just as willing to undergo hardship and risk their necks as are the princes engaged in dragon-slaying and tower-climbing. Not only that, they're usually better at spells. And where else could I have got the idea, so early in life, that words can change you?"


'Catcher In The Rye' had enormous impact on author/ columnist June Callwood. "It stands as one of the classics of this century, but its importance has come to centre on the fact that it is the most-banned book in North America," Callwood said. "My long struggle against censorship had its starting point with Holden Caulfield."


When the Niagara-on-the-Lake Public Library asked many prominent town residents the same two question, a variety of answers were received.


Veronica Tennant was influenced by the "universal truth" which was told with "surprising simplicity" in 'Les Miserables'. She remembers that Victor Hugo, the author, "insists with passionate conviction, upon man's moral potential and responsibility."


Gerry Wooll, Rosanne Fedorkow and Jean Huggins felt that the most important book for them was the 'Bible'. It was while reading a book by her favourite author, Ralph Connor, that Jean Juggins "suddenly realized the real meaning of 'as we forgive others'".


Duncan Mcintosh, Assistant to the Artistic Director, Shaw Festival, said "that all books change your life a little bit" but the one that changed him the most was 'Spoon River Anthology'. "Recording quiet lives as poetry, little dreams and sorrows as art, it encouraged me to create stories about where I was from, what I did and those I knew. It only said what I hoped could be said and that's why I think it changed my life."


Paul Reynolds, Producer, Shaw Festival, remembers being totally enthralled by Henrik Ibsen's 'Ghosts'. "I remember being totally enthralled, enraged, moved, and profoundly affected as the piece enfolded. Not only did it convince me of the right and necessity of Mrs. Alving's more liberal, humane view of life and the world, but it also made me truly understand the power of the theatre to excite, move and change. I believe it had a pivotal role in my decision to take, what to that point was merely a highly enjoyable activity, more seriously and eventually to make it my career."


Local historian, John Field, could not recall any special moment when he decided to become a reader of books, but the opportunity was there when he first opened his 'Journeys Through Bookland' (an anthology of great books, plays, essays, speeches and poetry). "Since then the habit of reading has enriched my whole life."


The editor of the Niagara Advance, Shirley Dickson, recently read 'Transitions' by William Bridges and found that "it takes the reader through life's changes using endings as beginnings giving insights along the way. I know others going through the transition process of living would also find it helpful."


Ara Torigian, Principal, Niagara District Secondary School, had this to say about 'Plain Speaking' by Harry Truman. "I was so impressed by the honesty of Harry Truman and his obvious dedication to serving the public that I would like to see this book made mandatory reading for anyone aspiring to get into politics or any business man who wants to do business with the government. Harry says it as it is, or, should be!"


During Ontario Public Library Week, the Niagara-on-the-Lake Public Library will host a series of events including: "Your Card is the Key", a public library card membership drive, a "Create A Book Contest", a children's theatre production of "Harry the Dirty Dog" by Erewhon Theatre on October 24, an "Open House" on October 25 and free book bags, balloons and entries in a book draw all week long.


"Your Card is the Key" to a world of information and entertainment, so drop by the library soon and check out a book or two or three. Who knows how they might influence you. 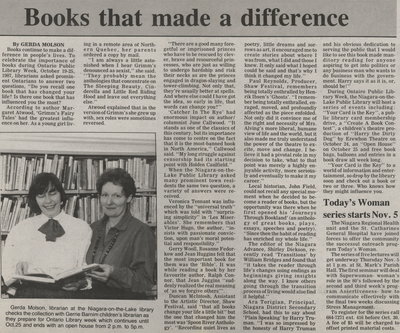