The Masonic Lodge at the corner of Prideaux and King Streets is reputed to have been the site of the first meeting place of the Masonic Order in Upper Canada.

The present building, also known as the Stone Barracks, has served a number of varied and interesting uses through the years. It is reported as being a store, school, hotel, coffee house, ballroom and barracks. For nearly a century it has been the headquarters of the oldest Masonic Lodge in Canada, Niagara Lodge No. 2 A.F.& A.M.

In his history of the Niagara Lodge, J.L. Runnalls states that "Masons have met at, or in the vicinity of Niagara since 1773". A plaque on the building bears the date 1972, the date that St. John's Lodge of Friendship No. 2 was warranted by William Jarvis, Provincial Grand Master of Upper Canada.

Runnalls explains that a military lodge, No. 156, was stationed at Fort Niagara and civilians on the west side of the river were organized to complement this. He states early records indicate that this Lodge, met at various homes throughout the area.

The Mason Lodge was constructed in 1816 largely from rubble of the burnt town. Evidence of this may be seen today at the south side near the east corner of the building as well as in the foundation.

The roof of the building has experienced structural changes and, as shown on our front page, it once had dormer windows to provide additional light to the second at that time. Evidence suggests the entire floor was one room at that time.

The roof structure was changed again in 1880 after the property had been purchased by Freemasons. The roof has been replaced since that time with the pitch altered and the widow's walk removed.

An old map indicates the present property known as "Lot 33" was the site of the first Freemasons' Lodge, the meeting place for the citizens of the community. It

The present building was constructed by John Eaglesum. In 1830 it was used as a private school and later for a dancing academy. At one time it was a boarding house and it served as a barracks during the Rebellion of 1837 and the 1860 Fenian Raids.

In 1860 the Masonic Lodge leased the top floor of the building from William Lettle, a member of the lodge who owned the building at that time. Lodge records indicate a payment of $40 for one year's rent. Upon the death of William Little in 1875, the Freemasons were offered the property for the sum of $500. The transfer was made on February 27, 1877.

The lower floor of the building has provided a source of revenue at various times, although the upper floor has remained a regular meeting place for Lodge members. The Orange Lodge and the Home Circle utilized the ground floor as temporary quarters and in 1919 it was used as a classroom.

completed a study of the building and notes the possibility of a large rectangular cooking fireplace with bakeoven having once been part of the original structure. His report draws attention to the early mantelpiece on the south west chimney, a fine example of the first quarter of the 19th century.

Other original trim in the building which has survived the many changes include the chair rails and base boards as well as architraves to doors. The staircase leading to the basement is a fine example of the Victorian era and it is suggested this staircase may have been salvaged from the old Queen's Royal Hotel.

Although the building is a composite of architectural design, the victim of changes to accommodate a variety of activities, its historical significance is considerable. Lodge members have requested the building be designated under the Ontario Heritage Act and are presently investigating the possibility of a restoration and preservation program. 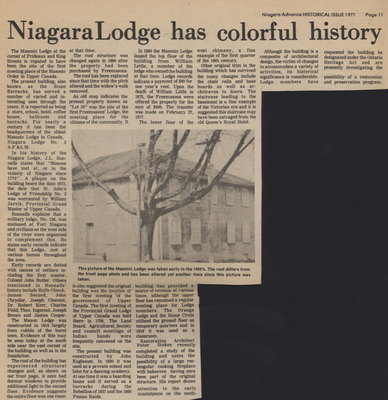