Text below reads:
"In an old MS recording the proceedings of a meeting of the government Land Board at Niagara on June 24, 1791, it is shown that the authorities took action to erect a Masons' Lodge. This was the first hall built for Masonic purposes in Upper Canada. It was used for other purposes besides Freemasonry, for Divine Service was held here before a church building was erected, and the hall was used for the meetings of the Provincial Agricultural Society, and for conferences between Lieutenant-Governor Simcoe and the Mohawks and other tribes of Indians. Most interesting of all is the fact that the first Legislature of Upper Canada met first in this hall on September 17, 1792. It was destroyed by fire in 1813. About the year 1816 another building was erected on this site, partly from stones gathered from the ruins of the town, which was in due course used as a store, as a school, as a hotel, and as a barracks, and was long known as the "Stone Barracks." It is this building which is now the home of Niagara Lodge, No. 2, G.RC."
Date of Publication
1791
Subject(s)
Clubs
Fraternal organizations
Illustrations
Masonic buildings
Masonry
Memorabilia
Organizations
Freemasonry
Masons
Men's clubs
Niagara Masonic Lodge No. 2 (Niagara-on-the-Lake)
Robertson, J. Ross (John Ross), 1841-1918
Local identifier
NML00027
Language of Item
English
Geographic Coverage
Location of Original
Colin K. Duquemin Masonic Museum
Niagara Lodge #2 A.F. & A.M., G.R.C.
153 King Street, Niagara on the Lake, Ontario
------------------------------------------------------
The Museum was named after Bro. Colin Duquemin for his work in preserving masonic past.
It is home to many artifacts from Niagara district, including regalia, books, certificates,
and masonic documents.
Contact
Niagara-on-the-Lake Public Library
Emaillocalhistory@notlpl.orgWebsite
http://www.notlpubliclibrary.org
Agency street/mail address
10 Anderson Lane P.O. Box 430
Niagara-on-the-Lake, ON L0S 1J0
905-468-2023 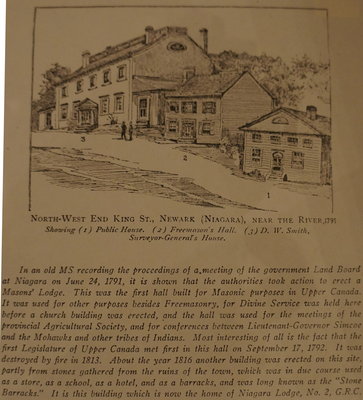