AN ESSAY BY ROMAN BARANIECKI

Elizabeth Caroline Ascher, daughter of Joseph and Margaret Masters, was born in Niagara-on-

responsible positions in many social institutions and in local government. Her father was a

member of the Board of Public Schools for 25 years and served in the Canadian Volunteer Militia. Elizabeth had four brothers, one of whom would become Niagara-on-the-Lake`s Mayor in 1932, and a sister who died in 1883 when she was not yet two years old. The Masters family was also active in the life of St. Mark’s Anglican Church.

Elizabeth attended the local high school as a teenager, where she was most likely influenced by her teacher, Miss Janet Carnochan, to take an interest in history and writing. It is no coincidence that the list of founding members of the Historical Association of Niagara-on-the-Lake in 1896

includes the names of both teacher and student.

Following these hardships, Elizabeth Ascher immersed herself in public service for the town and

the region where she was raised. Her devotion to service was tireless, and a brief listing of her

many causes provides a glimpse of that dedication: co-founder and Regent for 12 years of the Newark Chapter of the Imperial Order of the Daughters of the Empire, a charitable and patriotic educational organization; a Board member of the Historical Society and Museum in Niagara-

on-the-Lake since 1896; Director of the Niagara Agricultural Society; member of the board of

the local Red Cross; co-founder in 1920 of the Women's Hospital Aid (now called the Niagara-

on-the-Lake Hospital Auxiliary); and board member of Boy Scouts and Niagara High School Alumni. Beginning in 1904 and continuing for 37 years, she was a correspondent for the St. Catharines Standard. She wrote also to the Buffalo Times, Old Mail and Empire, and the local Niagara Advance. Her essays on the history of the region were published in historical journals edited by the Historical Society in Niagara-on-the-Lake.

Janet Carnochan wrote in 1923 that “many have been the Military forces seen in Niagara and vicinity” from the dawn of its history. So it was perhaps not unexpected that Elizabeth Ascher joined the activities of the local Red Cross, caring for locally trained Canadian soldiers of the

35th Battalion who were stationed in the town, when World War One broke out in 1914. Sad news from Europe started reaching the town. The list of young men from Niagara-on-the-Lake, who remained in the fields of France forever grew sadly longer each year, as documented in Catherine Creed’s work "Whose Debtors We Are" published in 1922, through the efforts of the Historical Association in Niagara Falls.

After three years of war struggles, Canada and residents of Niagara-on-the-Lake must have been very weary. Then suddenly on September 28, 1917, into the town`s life arrived “one of the most

romantic and unique periods in Niagara’s long and varied history,” as Elizabeth Carr Ascher herself was to describe it 15 years later. Colonel Arthur D’Orr Le Pan with a Canadian staff and a group of Polish cadets arrived here, on a sunny day, from Camp Borden in order to set up the Polish Army Mobilization Camp.

Niagara-on-the-Lake at that time was home to about 1,300 residents. But in the two months following October 3, 1917, there arrived another 5,000 first volunteers, most of them from the United States. As Elizabeth Ascher further recalled, they were "men of a foreign race (…) paid by France, maintained by the Poles, officered by Canadians, by whom they were outfitted, hoping to liberate their country, that for 122 years had been held in bondage by three greedy oppressors, Russia, Prussia and Austria. These patriotic Poles had during all that time kept the fires of patriotism burning, and now, when the time was ripe, they were ready and eager to strike a blow that, if successful, would restore their beloved Poland to its place among the nations."

Perhaps in other circumstances, such an influx might have sparked mistrust from the local

population. But the ardent patriotism celebrated every day, in addition to the excellent discipline

and education of Polish soldiers, won these new arrivals the hearts of residents and the admiration of Canadian officers.

Canadian military authorities, the Red Cross and YMCA organizations worked selflessly to create decent living for thousands of Poles, but those measures would have been inadequate without the help of the city's warm-hearted populace, especially in the approaching winter months. The town provided public buildings and many residents offered private homes so the "Polish boys" could find shelter from frost. The library was filled with Polish books, there were concerts with a Polish music repertoire and renowned artists sang Polish songs. In public institutions and in stores everywhere there were signs in Polish language.

Elizabeth C. Ascher from the beginning became immersed in ensuring the wellbeing of the soldiers of the Polish Army in America. During an outbreak of deadly Spanish influenza in 1918 - 1919, she risked her life even during the quarantine. She took care of the sick soldiers, who called her the Angel of Mercy and the Godmother of Polish soldiers. She was compared to the legendary figure of Florence Nightingale. (The epidemic didn’t spare Canadian personnel, as it is evidenced by the death, in January 1919, of Captain E. B. Wright, the quartermaster of the camp.) Elizabeth Ascher was instrumental in establishing a Polish military cemetery in Niagara-on-the-Lake in the Catholic parish of St. Vincent de Paul. She remained the caretaker of this cemetery for the remainder of her life.

At the request of Helen Paderewski (1856-1934), who visited the Tadeusz Kościuszko Camp in

was Elizabeth Ascher’s young niece. The collected financial resources and material goods were sent to the Polish White Cross, the charity organization formed by Helena Paderewska, and later to the Polish Red Cross.

Some parcels were also sent directly to the trenches of Polish soldiers fighting on the front. In

March 1920, from the Bolshevik front, Father Rydlewski wrote to Elizabeth Ascher, "If there is a spot on earth, the Polish boys love, it is Niagara-on-the-Lake where they spent so many happy

hours, and received so many kindness."

After the end of war in Poland she continued to help: together with the circle of her friends,

she sent money and clothing parcels for Bydgoszcz, where Father Zygmunt Rydlewski was the director of the House of St. Joseph, an orphanage for children of fallen soldiers. In December of 1925 he wrote to Elizabeth Ascher: “Kindly present Christmas and New Year’s greetings and good wishes to all my dear friends in your beautiful town; I will always carry in my inmost heart and take with me beyond the grave a grateful remembrance of their unfailing kindness towards me and my boys.” 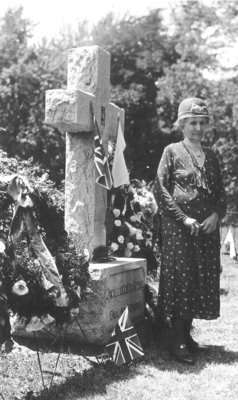