Creators
Thomas J. Britt, Correspondent
Wallace Armstrong
, Recipient
Media Type
Text
Item Type
Correspondence
Description
A letter from Thomas J. Britt to Wallace Armstrong explaining how his father (William Armstrong) passed away, as Mr. Britt was there when his death occurred.
Notes
From Armstrong family collection.
The Full Text may not bee 100% accurate.
Date of Publication
1921
Subject(s)
Correspondence
Death
Armstrong, William
Personal Name(s)
William Armstrong
Local identifier
QC00562
Language of Item
English
Geographic Coverage
Donor
Huggins, Jean A. E. (1895-1989)
Copyright Statement
Copyright status unknown. Responsibility for determining the copyright status and any use rests exclusively with the user.
Contact
Niagara-on-the-Lake Public Library
Email
Website
http://www.notlpubliclibrary.org
Agency street/mail address
10 Anderson Lane P.O. Box 430
Niagara-on-the-Lake, ON L0S 1J0
905-468-2023
Full Text
QC00562-01:
Mr. Wallace Armstrong
The St. Augustine Tourist Club has summoned you from your far home on a mission which has no parallel for sadness
Your father, who was revered and respected by every member of the Club, passed suddenly from our midst to that bourne from which no traveler returns and now sleeps the sleep that knows no breaking
The writer possible was more intimate with him than any other member of the Club. In the early morn we would meet at the bowling green and clear the ground for the games. He loved the sport and was an expert at the game. He would often say to me "lets you and I get into this game and bowl together." I like to bowl with you."
Between the games he would tell me of the fruit farm which he formerly owned in Canada, of his experiences in [commendation?]

QC00562-02:
with the Horticultural Society of which he was the president. Of the five Alberta peaches he raised, and the happy times he had in his Canadian home.
The lecture he was to have given on the "Origin of Soils" was one to which he had given much thought, and to the delivery of which he had anticipated with the greatest pleasure. He had studied his subject and had prepared his specimens with care. With me he had discussed several of the points he wished to touch upon and the facts he had gleanec to sustain his theories and his arguments.
When he stood to commence his lecture I sat immediately in front of him, as I did not wish to miss a word. He gave me no indication that anything was amiss with him, though he changed his glasses once or twice and stated that would have to abbreviate certain portions of his notes.
He began, "In the beginning God!" You

QC00562-03:
see I start with the first verse of the Bible. In the beginning God created the heavens and the earth, and He saw that it was good. In the beginning God!" His face blanched, he fell straight forward into my arms. He came forward as straight as falls a tree. No sinking of the joints or muscles. That sentient being, that brilliant intellect with a message that he was to deliver to his brothers and sisters on his lips, was silenced forever by the Grim Reaper.
Tenderly was he lifted by his friends who sprang to his relief and medical aid summoned, but that loving heart had ceased to beat, and he had passed to the "Great Beyond!"
Twere sad that one so gifted, so loved by all, so esteemed for his genial good nature and gentlemanly demeanor should be selected at such a time by the swift messenger and taken from us in an instant of time.

QC00562-04:
4
To you, his son, 'tis ours to offer such consolation as we may. In life we loved him; in death we cared for him; and now deliver to you all that remains of the author of your being, who reared you in his home. 'Tis yours to take him to his final resting place on earth. And say, in the language of the old hymn:
"Sleep on, beloved, sleep and take thy rest,
Lay down thy head upon thy Saviour's breast;
We loved thee well, but Jesus loved thee [paper is torn]t;
Good night! good night! good night! 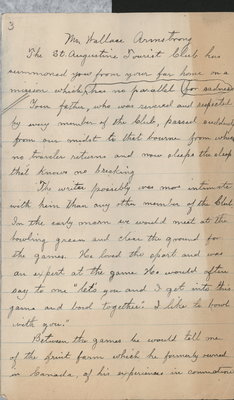