Full Text
QC00576-01:
1919
Wm Armstrong -
Campbell Apartments St. Augustine Florida
How a $2000 farm was made worth $20.000
This story tells how Wm. Armstrong once a Montreal merchant fifty year's ago decided to go west without experience and little capitol, start farming and fruit growing. How he succeeded to make a $2000 - farm worth $20.000.
Fifty years ago St. Catharines & Montreal had only two stores open for business namely Dupuis Bro and Wm. Armstrong.
At that early date many of the best front lots on this street were occupied with vegetable gardens.
However before the end of five years many new retail stores were opened principally by French Canadian firms at the east end -
It will doubtless be of special interest for Montrealer's of today, to know whom Armstrong bought his goods from fifty years ago-

QC00576-02:
2
they were principally seated of sterling integrity shrewd and economical, who laid the foundation of Montreals present prosperity The word graft or duplicity was little known among this type of man - namely James Roy M. Jospeh Mackay, James A. Mathisson A Ramsay, Ogilvie Bro, David Torrance, Gilman &, Lyman, Clair, Linton Hooper, Greenshield T90, Wm Darling Wm McGibbon corner notre dame and St. Gabriel Alexander McGibbon Great St. James St and others -
Armstrong was once in the employ of Henry Morgan & McGill at founder of the prest well known Colonial House on St. Catharines St. and assisted that firm to move their stock from McGill st to the corner of Victory square and St. James St.
He had a liberal following of customers from the ^pioneer Scotch and Glengarry farmers to whom he could anme and point out the different clan and family tartans so clear to their Scottish hearts - More of which may be the substance of another story -
For about five years he had a profitable business and had married a successful Western farmers daughter whom he met for the final time in her brother's Dry foods Store on St. Paul St. city of St. Catharines Ont.

QC00576-03:
3
forty five years ago Armstrong & wife decided to leave the city for the farm, sold out their city business at a sacrifice of several thousand dollars.
The farm was situated on the bank of the Niagara River seven miles from Niagara Falls Ont. and consisted of 28 1/2 acres of deep dark sandy loam. The land was mostly occupied with large old apple trees, growing in a stiff quack or couch grass sod, which is generally considered a serious handicap in any soil.
However this solid bed of quack roots when properly treated and rotted, became a storehouse of [word] in the soil -
Ten acres of the apple trees were soon removed, and cut up for fire wood, and the land ploughed late in the fall, five inches deep, leaving the quack roots exposed for the winter frost -
Early the next spring it was well cultivated with disc harrow, until corn planting time, when it was planted with corn and kept very clean with horse cultivator and hoe, especially in dry weather
A bountiful crop of corn was harvested and removed, Hogs were turned in to clean up nubbins, grubs &, the exercise was of much benefit to the hogs in health and weight-

QC00576-04:
4
Late that fall the land was ploughed
Early the following spring the land was harrowed down level and staked off 15x15 feet each way and planted with 1500 peach trees of the following varieties, Greensboro, 5% Yellow St. John, 50% Early Crawford 15% Elberta 30% ripening in the order named 0
When danger of frost was passed the land was once more planted with corn and kept clean
After the harvesting of a second bountiful crop of corn, the land was ploughed toward the peach tree row's, leaving a deep water furrow in the centre between the rows.
The proper drainage of any peach orchard is of absolute importance -
The following spring very few dead peach trees had to be removed. All trees were carefully straightened up. The land ploughed and prepaired for an entire change of crops -
Strawberry plants of the following commercial varieties, Beder wood for extra early, Glenmarry. Improved Wilison adn Williams, were bought and expressed from a Southern Climate, in order to have well grown plants before northern plants were ready
Three rows of strawberry plants were planted between each two rows of peach trees, first row four feet from peach row and plants set fifteen inches apart in row

QC00576-05:
5
They were fed by scattering evenly over the ground a moderate amount of well rotted compost manure, and fine ground bone meal and kept clean -
Four rows of potatoes were planted between each two rows of trees seed planted five inches deep, and twelve inches apart in row, 1st row 3 1/2 feet from peach row
Tomato seed was sown in the hot house Mar. 1st and transplanted from seed bed into larger bed four inches apart each way April 10th They were kept short and stockey by frequent cutting back, transplanted into open field May 20th. First shipment of ripe tomatoes July 2nd. The tomato and strawberry crops for three years were a wonderful success in quantity and quality. The crop was shipped by boat principally to M William and Everist Wholesale fruiters Toronto Ont. netting the grower remarkable cash returns for his investment -
Eventually twenty give acres were planted with peach trees, intensive cultivation was kept up. Annual applications of six to eight car loads of manure compost bought from Marchmouh Toronto were applied to the Orchard during the winter months -
Also annual applications of several tons of commercial fertilizer such as muriate of potash, fine ground bone meal were applied to the orchard in the spring.

QC00576-06:
6
The pruning of the peach trees to the low lead system was a special feature in this orchard 1st to prolong the profitable bearing life of the tree, thus guarding against overproduction in any one year
2nd to produce a larger percentage of first grade and highly colored fruit
3rd to assist nature in growing a well ballanced shapely low headed tree, thus permitting the sunshine and air to reach every part of the tree, and also to permit the sprayer and picker to perform their work standing on the ground and without ladder's
The grower of this orchard of over 4000 trees faithfully followed out instructions printed in bullitens mailed free of charge by the Dominion and Ont. Governments in regard to when, how and what to spray to prevent injury from troublesome insects and fungus diseases. Thus wonderfully adding to the general prosperity of the orchard -
The gross annual cash receipts were from the period 1907 to 1914 as follows. 1907-5171-74 1908-$6594.72 - 1909-$9634-011910-$10577-90 1911-4886.03 1912-$12125.35 - 1913-$5840-59 1914-$2554-59 Making a total for the eight years of $57384.53
The frost injury during 1914 was very serious

QC00576-07:
This orchard became famous in 1901 when it was awarded a silver medal at the Pan-American Exhibition Buffalo N.Y. 1901 for an exhibit of choice fruits -
It also won 1st prize in competition for the best orchard of any kind having over 2000 trees or over in the famous Niagara District and presented by the Department of Agriculture of the province of Ontario -
The owner was presented with the highly valued Wilder Bronze Medal for having wont the highest award in competition for the best authenticated report from any orchard of any size or kind in the United States or Canada, offered and competed for during the year 1910 and presented by the Pomological Society of the U.S. at the Society's annual meeting held at Tampa Florida 1910
Also at an annual meeting of this same society held in the City of St. Catharines Ont. the peaches from this orchard received a special Wilder Bronze Medal also the St. Catharines Horticultural Society's first prize for an exhibit of peaches grown anywhere
The owner sold this farm for twenty thousand dollars and returned -
Media Type
Genealogical Resource
Text
Notes
Seven handwritten pages about William Armstrong's peach orchard. Papers measure: 27 x 20 cm.
From Armstrong family collection.
The Full Text may not be 100% accurate. 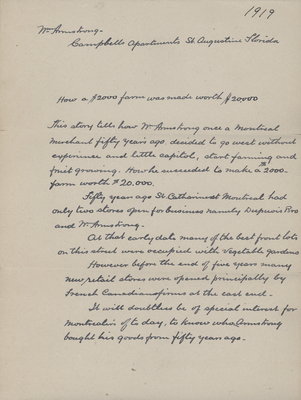