Full Text
The Canadian Horticulturist
Fruit Edition
Vol. XLIII. No. 8
TORONTO, AUGUST, 1920
Handling Peaches by the Carload
The handling of peaches in carload lots direct from private grower to consumer has been demonstrated to be a profitable business by C. Howard Fisher, proprietor of Dulverton Fruit Farm, at Queenston, Ont. Mr. Fisher's post office is Niagara-on-the-Lake. Mr. Fisher has specialized for some years in selling reaches by the carload. From his experience, he is convinced that farmers in other parts of the province and city consumers, through organizations that they might form for the purpose, should order their peaches direct from the growers in carload lots. "The consumer would save 75 cents on each basket, and the grower would make from five to eight cents more," Mr. Fisher said to the editor of The Canadian Horticulturist who visited his farm early last month. Mr. Fisher was then in the midst of the cherry harvest, but he took time to tell some of the details of his work and methods in growing and handling peaches by the carload.
Some Peach History.
Peaches have been grown on Mr. Fisher's farm for more than 100 years, He showed me a field that had grown peaches almost continuously for over a century. There are trees there now of the Jacques Rareripe variety that are 17 inches in diameter near the butt and 35 years old. Mr. Fisher claimed that the first commercial peach orchard in Canada was established on this same farm before the war of 1812, by a Mrs. James Durham, a United Empire Loyalist. The farm was procured from the Crown in 1797, and peaches set out some time later. This should be an important contribution to the historical study of the peach in Canada. The writer remembers how difficult it was some 15 years ago, when he prepared an article on the peach industry for publication in a report of the Ontario Fruit Growers' Association (1906), to secure authentic information respecting the early history of the peach in this country. Palmer and Harris' bulletin on "Peach Growing in Ontario," published in 1916, records peaches grown by a Mrs. Simcoe, Niagara, as early as 1793, but not in a commercial way. Gould's book on "Peach-Growing," published in 1918, quotes a reference to peaches growing in Southern Canada in 1748—but, was not "Southern" Canada in those days, under the French, somewhere down along the Ohio River? At any rate, it is all very interesting, and Mr. Fisher can produce deeds and records to substantiate his contention. Facts on peach history from other sources are requested for publication.
There is a vast difference, however, between growing a few peaches for home use, or even for market, a hundred years ago and growing peaches today for sale by the carload. Mr. Fisher grows the leading varieties, such as St. John, Elberta, and the like, and is always on the look-out for new varieties that will lengthen or fill in the season. He has about 2,000 trees of Rochester, the comparatively new, early yellow freestone. A photograph on this page shows some of his Rochesters when one year old.
He showed me an orchard of the J. H. Hale peach, that demonstrated the fact that peach trees require soil that is well drained. One end of this orchard is on low ground, with poor drainage, and shows most decidedly the effects of such a situation, compared with the other end of the orchard on high ground, well drained, with trees in first class shape. Mr. Fisher now has his whole farm underdrained. He put in a little over 13 miles last year, and the effect on his orchards can be seen already.
Picking Methods.
"I instruct my pickers to pick by sight, not by feel," said Mr. Fisher. "A peach is ready for picking when the ground color takes on a yellowish tinge. The peach will mellow after picking. The pickers use a picking strap to carry the basket in front of them; in this way, loss 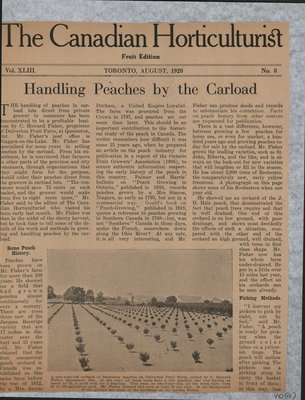