William Armstrong of Queenston was suddenly stricken with heart failure while making a speech at the Tourists' Club of St. Augustine, Florida, on Thursday last. He was 76 years of age and had been a resident of Queenston for 45 years. He was a pioneer in the fruit culture of that section and was for many years President of the Niagara Fruit Growers' Association.

Mr. Armstrong was one of the first Niagara growers to go into the growing of peaches on a large scale and by his study and experience with this fruit did a lot to bring the Niagara Peninsula into its present fame as a peach country. Mr. Armstrong received many prizes for his peaches at Toronto and other exhibitions and received the Gold Medal at the Pan American World's Fair.

For the last five years Mr. Armstrong has been in the habit of spending his winters in Florida and was prominently connected with the Agricultural Associations there. It was while making a speech on Horticulture that he was stricken.

Up to the time of his death Mr. Armstrong always enjoyed good health and was a hearty and active man. It was a terrible shock to his family to receive a telegram from the President of the Tourists' Club advising of his demise. He is survived by three sons, Arthur and Wallace of Queenston and Norman of Toronto; and one daughter, Mrs. Wm. Walsh, who also resides in Queenston; and one brother, Mr. Thomas Armstrong of Carleton place.

G. Morse, an undertaker from Buffalo, N. Y., arrived in St. Augustine Monday, being sent southward by the relatives of the late William Armstrong of Niagara Falls, Can., to take charge of the remains and convey them to the late home of the deceased for interment. The local undertaken in charge has been R. A. Ponce, and following Mr. Morse's arrival here he made arrangements to leave St. Augustine on the northbound trip this afternoon at 2:15 o'clock p. m. Members of the Tourist Club, with which the deceased was prominently identified, appointed pallbearers at the meeting held last night and also made arrangements for all members who could do so to form an escort to the train. The death of Mr. Armstrong occurred very suddenly last week when the deceased was delivering a lecture before the Tourist Club. 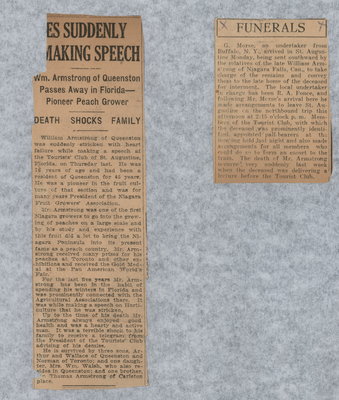