AN UNIQUE SUMMER HOUSE AT NIAGARA.

On the lawn of a Niagara River fruit farm there stands a summerhouse of unique construction which preserves a number of historic wheels. One is an old Scotch cartwheel—one helped to build the Welland Canal, one assisted in drawing the original forest of Niagara township.

The wheels seen in the picture carried peaches from the first commercial peach orchard planted in Canada about 100 years ago. This orchard, of about five hundred trees,

was planted by James Durham, a U. E. Loyalist, who left his property in Pennsylvania about the year 1786, and received a Crown land deed of property on the River road, Niagara township. Later, his four sons were the owners of about one thousand acres of land in the Niagara district.

The evidence in regard to the Durham peach orchard was given by Thomas Vrooman, who died in 1907, and was born in 1813. His father owned Vrooman's Point, where Vrooman's battery did execution on October 13, 1812. He said he remembered the orchard when a boy; also Mr. C. L.

Bradley, who is still living in Queenston, remembers it sixty years ago as an old orchard. 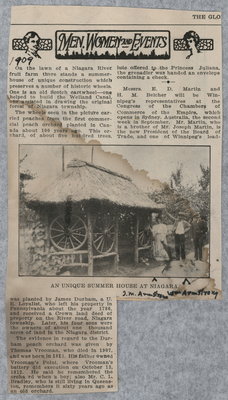