Media Type
Image
Object
Description
Image of Wampum Collection - Pitts River Museum, England - Taken by Horatio Hale, Anthropologist, 1871. Photograph taken in Brantford, Ontario, on September 14, 1871. Horatio Hale, who made these pictures, said that the zones were divided into groups. He was told that the five zones in the group left on the basis of the League: the long white belt is showing the world, and four smaller belt (with diagonal lines) shows the four walls of the long House. Four zones in the Center describe the first agreement between by the Iroquois and British. The ninth now is on the left, with rows of purple beads (zone of friendship) is a "peace treaty" Indians and Europeans. The seventh zone is centered, is a beaver meat and is an account agreement between the tribes of the hunting and fishing territories. Twelfth belt left was given by the Canadian Government as a confirmation of the agreements with the League. Zone in on the pictures (or rather half-belt remainder left in the State of New York), symbolized the formation of the League of the Iroquois.
Date of Original
Sept. 14, 1871
Image Dimensions
Image Width: 1403
Image Height: 1038 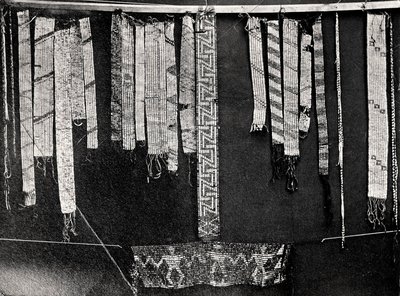