OHSWEKEN - Two more non-natives have been asked to leave the Six Nations.

Six Nations band council asked Pamela Henderson and her son, Jason Potter, to leave the community before the end of October.

Two months ago, a 31-year-old Alabama man was asked to leave while in the middle of a custody battle for his three children.

Interim custody of the children has been turned over to Randy Mansell's former wife, a band member, but he is still fighting for his right to look after his children and to stay in Canada. 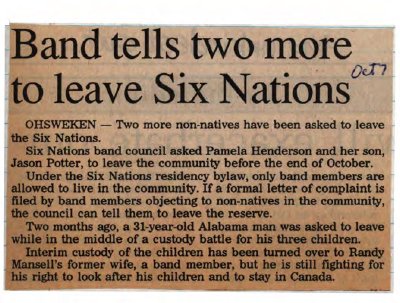