Much of her discussion with Grade 3 students at St. Cecilia's separate school Wednesday involved dispelling those outdated stereotypes.

VanEvery opened her presentation by asking the children what comes to mind when they think about Native people. She anticipated their responses - teepees, warriors, hunting, bears and skins.

VanEvery, a guidance counsellor at Hagersville high school who lives on the Six Nations Reserve, also recounted some Native history. She talked about Native lifestyle, customs and religion as it was before the white man arrived.

The presentation was part of the Grade 3 class's study unit on Native history.

"Speaking to young people is very important," VanEvery said. "There are so many stereotypes and wrong information. People are not educated about Native people." 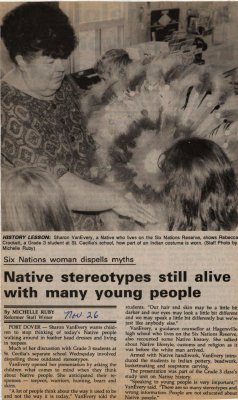