OHSWEKEN - I have often wondered how the corner of 6th Line and Cayuga Road on the Six Nations Reserve came to be called Beaver's Corner. Now I think I know.

I recently received a letter from Prof. Donald Smith of the University of Calgary. Prof. Smith was gathering information on Frederick O. Loft, a Six Nations man who organized the League of Indians of Canada. It was the native political organization in Canada formed in response to the repressive Indian Act.

Prof. Smith sent along some genealogical information he had gathered on the Loft family. He thought perhaps my wife, whose mother was a Loft, might know some family stories about Fred Loft. Not too surprisingly, she did not know any.

Fred Loft died 60 years ago at age 73. His father, George Rokawho Loft, raised him on the family farm near Beaver's Corners. This is the sixth concession on the eastern end of the Six Nations Reserve.

My mother-in-law's branch of the Loft family came from the first concession on the western end of the reserve.

George Rokwaho Loft was a valuable member of Christ Church, the picturesque little Anglican church which stands near Beaver's Corner. In fact, he donated the land on which the church stood.

The building was started in 1873 and finished in 1874 according to a March 21, 1979 article in the Six Nations weekly called The Tekawennake.

John Beaver, whose farm was across the road, drew up the plans and oversaw the building of the church. James Beaver, a noted wood carver also worked on outfitting the church.

As much as I would like to claim them, I'm afraid the famous Jim Beaver and John were not closely related to my branch of the Beaver family. According to an old map of the reserve done about 1850, there was a G. Beaver in possession of the family farm on the first line, east of Medina corner. This is quite a distance from Beaver's Corner.

In the 1960's, I taught at Six Nations School No.11 near Beaver's Corner. There was a man named Hugh Beaver living nearby but we never met. I believe he was the last Beaver to live at Beaver's Corner.

Our Town is an Expositor feature that provides a forum for news and views from some of the smaller centres in the region. George Beaver is a freelance writer, who for many years taught school and was principal at schools on Six Nations and New Credit reserves. 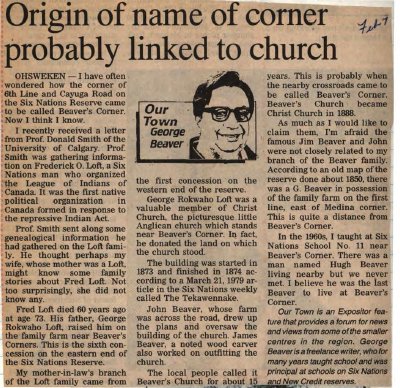