OHSWEKEN - Demorcratic countries find it difficult to interfere in the internal problems of other countries.

For example, it took months of agonizing before the NATO countries and the United Nations decided to try to stop the killing in Sarajevo.

With this in mind, we can see how serious the situatin is in our own backyard when the Austrian parliament passes a resolution asking our Canadian government to stop the systematic denial of the human and aboriginal rights of our Cree brothers of Lubicon Lake.

The Six Nations have a close bond with the Lubicon Crees.

A few years ago, I had a long talk I had with Chief Bernard Ominiyak, behind the Ononda-ga Longhouse. He and some of his people had come for a visit to Six Nations. They had erect-ed teepees on the grass behind the longhouse and they ate their meals in the cook house.

After they returned home, they built a longhouse of their own for their tea dances and to show their admiration for Six Nations traditions. Such was their respect for local faith-keeper Hubert Buck that they named the building in his honor.

After more than 50 years, the governments of Canada and Alberta still steadfastly refuse to treat the Lubicon people fairly. The Lubicons still do not have a land base and the means to control their way of life.

The giant Daishowa-Marubeni Corp. is poised to clear-cut traditinal Lubicon territory. All that is holding the company back is a boycott being held by the Lubicon Solidarity Network.

The group has organized a boycott against the use of Daishowa paper products by 43 companies. These companies include Woolworth Canada Inc., Kentucky Fried Chicken, A and W, the LCBO, Pizza Pizza and Country Style Donuts.

The boycott is to remain in effect until Daishowa makes a clear, unequivocal and public commitment not to log or buy wood from unceded Lubicon land before a land rights settle-ment and a timber harvesting agreement are negotiated.

Such a commitment would put financial pressure on Alberta and Canada to settle the 50-year-old land dispute. This is the only kind of pressure governments, and large corpo-rations, seem to understand.

Doing something because it is just and right does not seem to be reason enough.

Building roads and drilling for oil on traditional Lubicon land have destroyed most of the livelihood of the Lubicon, who used to live by hunting and trapping.

The discovery of oil has meant not millions but billions of dollar for a lot of people but not for the Lubicons.

Hopeless and jobless, more and more young people are turning to alcohol and suicide.

The Canadian system, including the courts have denied the human and aboriginal rights of these native brothers in the past.

The resolution about the Lubicon which the Austrian parliament passed unanimously acknowledges the fact that other countries know about these abuses. 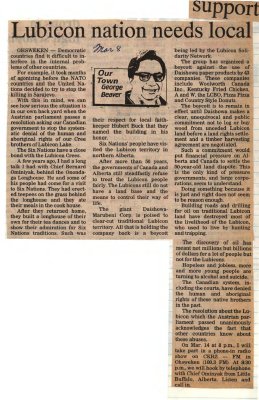