With her eye on turning pro, Obediah (formerly of Brantford's Black-Eye Boxing Club) changed clubs and trainers in favour of Hamilton's Steeltown Boxing Club about a year ago to advance her training with a club with several pro-fighters on their roster.

"Bob (Wilcox, her Steeltown trainer) has been working on my footwork and technique, which took a little getting used to," she told Two Row Times. "It was almost like starting all over again and had to adjust my timing and style quite a bit, but I'm used to it now."

Not to take anything away from her former trainers and boxing club, but in Hamilton she is getting better bouts and has the input of other pro boxers in the camp to help her improve as a pro. She won Bronze at two Canadian Championships and amassed several impressive wins with former trainer Jackie Armor under the Black-Eye Boxing Club banner.

"My technical skills are much better now and my footwork has improved since coming here," says Obediah.

She went down a weight class for a time, which made her faster and move better, according to her own analysis, but returned to her familiar 54k weight for the Ohio tournament.

She says that once she turns pro, which she hopes to do in December, she will likely be fighting at the lesser weight class.

"It's much harder to keep weight at the lower weight class, but I feel better there," she says.

Wilcox took four of his fighters to the Ohio tournament, including Obediah, and won all four bouts.

"I didn't know it was going to be a title fight," Obediah laughs. "When we got there for the weigh-ins, we looked at the schedule of prelims and I didn't see my name anywhere and wondered what was going on. Then I looked at the feature card of four title fights and I was on it."

It didn't matter much because Cher was ready to go and took the unanimous decision, landing several uppercuts against Smith to win the Gold in her weight class in the cross-border matchup.

Obediah has all of her bases covered. She has recently completed Police Academy to pursue a career as an OPP officer, however, has put that on hold for now so she can concentrate on her pro boxing career.

Obediah will be fighting next at her home club at the Steeltown Boxing Club in Hamilton on Dec. 4th, after which she and her coaches and trainers will discuss turning her pro. 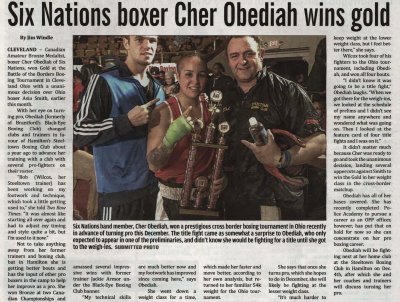