Representatives from Imperial Oil met with band council Jan. 23 to discuss the proposed extension of an oil pipeline across lands granted to Six Nations under the 1784 Haldimand Proclamation. The deal would, in part, see the company invest about $1.5 million in education and employment programs on Six Nations over the next seven years.

But perhaps more significant than the company's offer to invest in the community, said Six Nations Land Claims Research director Phil Monture, is Imperial Oil's acknowledgement of Six Nations' claim to the Haldimand lands, which extend six miles along both sides of the Grand.

"This is the beginning of something. It hasn't happened before in this area," Monture told band councillors at Wednesday's presentation by Imperial Oil.

Imperial Oil is seeking the easement as part of a pipeline extension project that would connect the company's manufacturing and research facility in Sarnia to its Nanticoke refinery near Jarvis. A new facility at the Nanticoke refinery will treat crude oil from both sites, and send the refined product Toronto through an existing pipeline.

"It is not an easy task to take sulfur content out of gasoline," Howieson said of reducing sulfur levels in gasoline to 30 parts-per-million, which Canadian oil companies will be required to do as of Jan 1, 2005.

"We're going to build one sulfur removal facility at the Nanticoke refinery, and that's going to remove the high sulfur components in gasoline from both Sarnia and from Nanticoke, so we get a real economy of scale. By building one plant fewer emissions get into the atmosphere. It's the right thing to do."

Connecting the two facilities will involve installing a 61-kilometre lateral line from Imperial Oil's existing pipeline system. The extension would run from Peter's Corners northwest of Hamilton, along the northeast boundary of the reserve, under the Grand River, and into the Nanticoke site.

"We're going to follow the hydro corridor for essentially the entire length of the pipeline, and in doing so we'll minimize any environmental impact as we go forward," said Howieson.

About 12 miles (just over 19 km) of pipeline would cross lands granted to Six Nations under the Haldimand Treaty.

"We do understand the importance of Six Nations' claim on the bed of the Grand River and the other lands that are in that claim."

"We've always considered Six Nations our neighbour, and now we can build long-term relationships and work on some good things through this pipeline."

Under the lands agreement Imperial Oil would pay "reasonable" compensation to Six Nations should the ongoing land claim be settled in the band's favour. The company would also notify Six Nations Band Council of any archaeological discoveries found during the pipeline's construction, and would construct and maintain the pipeline "in a way that protects people and the environment."

Six Nations would in turn agree to grant Imperial Oil a future easement upon favourable resolution of the land claim and would work with the company to deal promptly with archaeological discoveries.

Monture, when asked by Chief Roberta Jamieson how "reasonable" compensation will be determined should the band's claim be upheld, answered that compensation would be defined through future negotiations or arbitration.

"(Imperial Oil) will have to sit down with us and negotiate a continual use of that easement right-of-way with the Six Nations - what forms of compensation that work out, whether it's dollars or cents, or whether it's an enhancement of the education process. That's a decision the council of the day can make."

Monture was also asked how an easement would be impacted should the band's land claim prove unsuccessful.

"If it's not our land this agreement can be terminated or the relationship with Imperial Oil can continue.

"Mind you at that point," he added wryly, "we certainly would lose our leverage."

The more immediate benefits for the band through the proposed easement would come through the employment the education agreement.

Under the agreement Imperial Oil would commit up to $1.5 million over the next seven years on education and employment programs geared towards providing community members the necessary training to enter the oil industry.

Howieson told council 1,300 processing and mechanical jobs will become available in Southwestern Ontario over the next 10 to 15 years, and that Imperial Oil alone will be looking to fill up to 400 positions.

"We've got a very good fit between Six Nations' needs and Imperial Oil's opportunities as we go forward," said Howieson.

"Six Nations people are looking for long-term employment opportunities, and that's something that Imperial Oil can work with and help out your people."

But, as Chief Jamieson noted, the employment and education agreement does not guarantee community members employment with Imperial Oil.

"There are no guaranteed jobs. There is no number of jobs in the agreement for our people. I think we should know that. There is a willingness to work together and there's an opportunity to develop, to support and so on, but there aren't any actual numbers," she said.

Jamieson also asked Howieson why Imperial's investment in employment training on Six Nations $200,000 annually for the first five years and $250,000 for the last two is included in side letters to council but not in the proposed agreement itself.

"I think it is really because we'd like to make sure that the programming and the work that we do is not hindered by a financial commitment, a financial constraint," Howieson replied.

"The money tends to get in the way of a program, is the way we look at it, and really the essence of what we're trying to do, which is working towards the ultimate goal of getting the education here."

"They'll be preparing yearly budgets with planned activities and getting approval to fund these through Imperial Oil, so we will fund the programs as they come forward," said Howieson.

"There are already an awful lot of good ideas out there that have generated that we're excited about going on."

Among these, said Staats, is partnering with Lambton College in Sarnia to offer preparatory programs for post-­secondary programs such as Chemical Production Engineering Technology (CPET) on the reserve.

"We just signed an agreement with Lambton to bring their preparation program here, because we know that our people aren't ready to go right into the CPET program. They don't have the math and sciences required for it," said Staats.

She added the steering committee wouldn't rely solely on Imperial Oil for funding should the employment and education agreement go through, saying the funding the company has pledged "is probably a third of what it would cost to run a technology preparation program. It's not nearly enough to run this so I've applied to the federal and provincial governments for grants to run this program."

The employment and education initiative, said District 1 Councillor Dave Hill, will encourage local students to focus more on the often-neglected areas of science and math.

"I think this is an opportunity for people now starting school to have something to look forward to. I think we're taking a step in the right direction."

On a larger scale, noted District 5 Councillor David General, the proposed easement agreement, and its

"I think the Imperial/Six Nations opportunity here is the first step in defining agreements that might come in the future."

Although council hasn't agreed to the proposal, General said the agreement has advanced to a stage where "it's a matter of dotting the I's and crossing the T's."

He added, however, that council won't be pressured into signing an agreement in haste.

"Of course, Imperial Oil wants this to go ahead as soon as possible," he said.

The company is planning to install the pipeline extension this summer and hope to have it completed this fall.

"But we won't sign before we're sure this agreement is right for Six Nations." 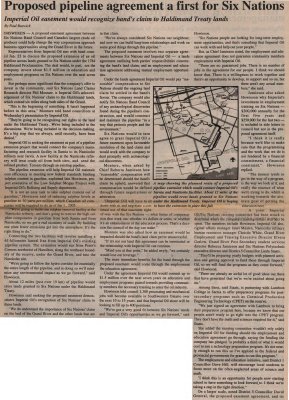