The Mush Hole Art Exhibit, currently on display at the Woodland Cultural Centre (the WCC), is still generating emotion and provoking conversation. R.G. Miller's graphic paintings and sketches retell some of his deepest darkest memories during his time at the Mohawk Institute.

In recognition of the powerful Exhibit, Saturday afternoon at the WCC was dedicated to an open forum, with four panelists to talk about the residual effects of the residential school system.

Beverly Jacobs, President of the Native Women's Association, was one of the panelists at the symposium. She took the opportunity to address the apology for residential schools, issued by the Canadian government in June.

"I've asked survivors 'what does this apology really mean?'," said Jacobs. "Many said nothing because

Exhibit generating discussions
(Continued from front)
it already took things away from us that we couldn't get back."

Jacobs was part of the delegation that responded to the apology. She spoke about not knowing that anyone was able to respond until 15 minutes before the apology.

Bob Watts, CEO of the Assembly of First Nations, also shared his memories of the minutes before the apology. He did say that the apology was a "significant milestone," and also spoke about the "huge debate" that took place as to whether or not Aboriginal leaders would be able to respond to the apology in the House of Commons.

Watts said that at first the Aboriginal leaders were not going to be given the floor to respond. It was only after the Opposition party leaders and the Senate offered their time to the Aboriginal leaders that the government "was pretty much forced to allow Aboriginal Leaders into the House of Commons and allow them to speak to the apology."

Watts also talked about those who believe the residential schools are history, and not a part present day problems.

Blanche Hill-Easton, a grandmother who had spent time at the Mohawk Institute reiterated the fact that the problems arising from the schools are an everyday part of the life of First Nations peoples. She spoke about her memories of the school, only receiving three hours of education a day. The rest of her days were spent doing chores and manual labour.

"The rest of my days were spent scrubbing these (the Institutes) floors and everything else," said Hill-­Easton. "And I was just 11 years old."

Not that Hill-Easton thought that the education she was receiving was of any use to her. She said that she realized at that young age that the education was nothing more than an attempt to eradicate her traditional Haudenosaunee way of life.

Hill-Easton like many other residential school survivors is still dealing with the pain and fears the schools created, and said that she doesn't know if she will ever heal from the experience.

"I was so ashamed of how I was treated in this place," she said. "Nobody knows my pain. You have no idea what we went through."

"We're never going to heal...we're like faceless people on this land."

Panelist Laurel Curley could relate to Hill-Easton's feelings of isolation and pain as she is also a residential school survivor.

R.G. Miller also knows too well the pain the survivors go through, and it's reflected in the powerful artwork he has created. The paintings and sketches drip with terror, anguish, pain and confusion, all of which were a part of daily life for Miller at the Mohawk Institute.

Panelist and Curator Neal Keating, suggested to Miller that he translate his feelings and time spent at the Mush Hole into an Exhibit. Keating said that he though it would be a healing process for Miller, he later discovered the nature of the beast that the schools created and that the healing process is a complicated one.

Miller entered the Institute at the age of two and remained there for eleven years. During his years at the Institute he underwent years of physical and mental abuse, rape and humiliation.

After leaving the school in 1964, five years before the Institute closed down, Miller's life spiraled into a dark place. He went through years of drug abuse, alcohol abuse, suicide attempts, and broken relationships.

Miller then went through an introspective nightmare that forced him to access memories that he had buried deep in his mind. Those deepest darkest tales of horror, done to him at the hand of some of the authorities at the school were purged onto a canvas.

Although being able to share those memories and dismal times may help others to start their journey of healing, Miller has not gotten that far.

He has said that he doesn't know if his demons created by the institute will ever go away, he's not sure if his mind and spirit can heal from the terrors he endured.

The Exhibit will be on display at the Woodland Cultural Centre until December 24th. 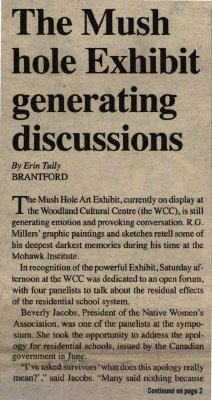