Creator
Brian Winter, Photographer
Media Type
Image
Object
Item Type
Negatives
Description
Black and white negative showing the awards given to Teddy Rowe and his family when he was named Bonniest Baby in the British Empire in 1924.

The silver cup was awarded to him by the Town of Whitby and the silver bowl and spoon were provided by a baby food company.
Notes
James Edward 'Teddy' Rowe, son of Thomas and Janet Rowe, was born in the Victorian Order of Nurses' home at Whitby on 6 April 1922.

His parents entered him in a British Empire baby contest in 1924 and on 29 July 1924 it was announced in the Toronto Daily Star that he had won first place out of 60 000 entrants in Class B (nine months - two years of age). The article called Teddy the 'Bonniest Baby in the British Empire' and this brought considerable fame to him and the town of Whitby.

John S. Martin, Ontario Minister of Agriculture, presented a cheque for one hundred pounds to Teddy and his family at the Canadian National Exhibition on 3 September 1924.

The baby contest was held in conjunction with the British Empire exhibition at Wembly in London, England. Teddy made several appearances after winning the contest, including the Broadview Boys' Fall Fair in Toronto and a banquet honouring Sir Hamar and Lady Greenwood at the Ontario Ladies' College.

Thomas Leonard Rowe came to Whitby in 1913 as a supervisor for the construction of the Ontario Hospital. After construction was complete around 1917, he acquired a garage at Dundas and Centre Streets that he operated until moving back to Toronto in 1926.

Teddy developed scarlet fever at the age of six and died of the flu complicated by a weakened heart at the age of eight on 1 May 1930. He is buried in Prospect Cemetery, Toronto.
Date of Original
March 1990
Dimensions
Width: 3.5 cm
Height: 2.5 cm 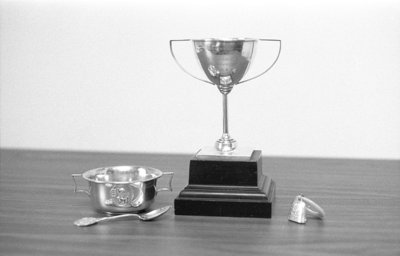