My wife's family worked there...Her grandfather Stephen Henry Sheppard (1887-1974), his son (her father) Chester Charles Sheppard (1920-2006) & Chester's father in law (her grandfather on her mother's side) Bertram Mortimer Lloyd (1896-1980), plus other Lloyd family members over the years. Chester was the only son of Stephen Sheppard.

Chester was one of the few people that owned his own home in the town of Point Anne. the house is located on the main road leading into the plant, last home from the plant entrance. It was a double home which Chester & Clara Lloyd-Sheppard converted into a single home. They had to chip the cement dust off of the garage & house roof quite often over the years because of the weight from the build up of cement. I can remember back in 1977 the build up of cement on the roofs in town, that where was left of the many houses that made up the town in it hay day. The company homes had been bulldozed into Lake Ontario, all that was left was the walkways leading up to each of them & the steps into them.

Chester told me that when the Ball (polymerize) Plant shut down once in a while during the night everyone in town would wake up because it was so quiet. By all accounts it could be heard for miles around. Also there were the bells & whistles that sounded at brake time or as a warning that there had been an accident in the pit etc. A very noisy place 24 hours a day around the plant & pit. Back then they didn't use ear protection at all, most including Chester suffered from hearing lost & dust inhaled while working there.

Chester was manager of the Ball Plant for a while, then became manager over the kilns which had lots of gauges to watch & dials to set to keep the heat just right in them.

A very demanding job for him. His children use to take turns taking his lunch or supper to him. The very large dump trucks frightened them as they passed by them.

Chester told me about himself, brother-in-laws & their friends that worked for the company taking down a very very large tree in front of his home. They borrowed one of the crane trucks from work so they could control where it landed. Once hooked up as high as it would go they cut the tree down. It was so big that the crane tipped over was it fell & ended up standing on its noise & rear wheels. They where afraid that one of the plant bosses would catch them, so they got the truck back on its wheels as fast as they could.

Chester was also on the company sponsored Cementmen Ball & hockey team when he was younger. He loved sports. As the "Great Bobby Hull" got good at skating he taught most of the children in town to skate & play hockey including Chester's 4 children. My wife Della was best friends with one of Bobby's sisters while growing up.

Della told me stories about the big ocean going cement boats coming in to be loaded with bags of cement. It was quite a site watching these big boats turned around & then dock at the cement company dock, which the town children jumped off of & swam about when the boats weren't tied to the dock.

Also about going to school at Point Anne Public School & grocery shopping with her mother in Point Anne.

For most of Chester's life he looked after the plant's water pump house for the plant & later the village. The water came right out of the Bay of Quinte.

In the early 1970's when they shut down the plant, the water works was leased to the Point Anne Town Water Commission, which Chester was head of. In the early 1980's the government gave them the money to build a new water purifying plant located off of the company land. Every night after work (was now working for the Milk Marketing Board in the cheese storage warehouse in Belleville) Chester would walk the 1/4 mile to the small building that housed the plant & pumps on the bay to check on it & make any adjustments etc to the system as needed. At least once a week (usually Saturday morning) he would back flush the system to get rid of all the junk from the bay that would accumulate in it. He did this right up till they moved to Belleville. Most evenings it took him about an hour, unless one of the pumps quit & had to be replaced. He always kept spare pumps on site.

Chester was very mechanical minded, and liked fixing things. He looked after his own cars & those of the towns people for many years. He had taken a car mechanic course in Belleville in the early 50's.

They sold the home in 1993 & moved into an apartment which their daughter Christine & her husband Wayne had built for them on the back side of their home.

Too bad Della's not around anymore, or she could tell you the reader all kinds of stories while growing up in Point Anne. Maybe one of her sisters or her brother could fill in some of the blanks from 1948 till the end of the cement plant closer. 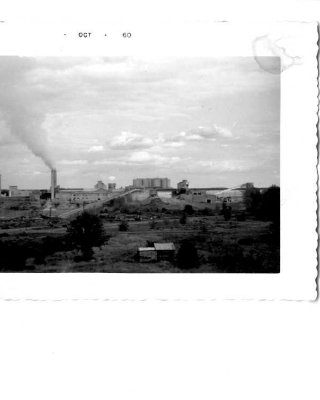