Creator
unknown, Photographer
Media Type
Image
Text
Item Types
Book illustrations
Photographs
Pamphlet illustrations
Description
Many photographs taken during the 1920s international relief missions were posed, such as this one, and many include children partially or fully unclothed to show the effects of starvation on the body. To date, we have not located any authenticated photos from the Holodomor that present a posed, partially or fully unclothed person or group of people suffering from starvation.

For further evidence of the 1920s origins of this photograph, please see Related Features at right.

This photo appears as #13 of 17 photographs that were mailed by the Ukrainian Red Cross with a separate numbered list in an official envelope date-stamped as arriving in Geneva on May 5, 1922. They are now housed among the documents of the "Union international de secours aux enfants" in the Canton Archives of Geneva, Switzerland. (Serbyn 1992, p. 675.)
Listed as:
13. "Діти, опухлі від голоду (Бердянськ)." "Enfants affamés (Berdiansk)" [Starving children (Berdyansk)]

Also available for viewing and download, with limitations, from the International Committee of the Red Cross, Audiovisual Archives: https://avarchives.icrc.org/Picture/9381
(Location incorrectly given as Russia). 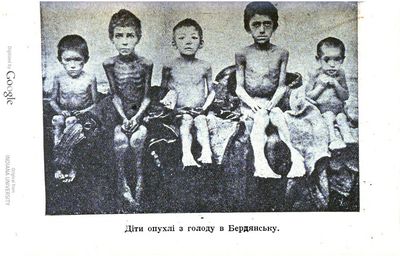