Creator
Wienerberger, Alexander, 1891-1955, Photographer
Media Type
Image
Text
Item Types
Photographs
Photograph albums
Album covers
Description
We are shown the upper body of a young man from the countryside lying dead on the sidewalk of a residential neighborhood of Kharkiv. He is surrounded by the feet of onlookers - urban residents, judging by the shoes. According to the photographer, the fact that this sight has elicited considerable attention may mean that the presence of dead or dying people on the streets is still uncommon, at least in this Kharkiv neighborhood.

For another photo of this scene see PD12: http://vitacollections.ca/HREC-holodomorphotodirectory/3636376/data

For related photo, essays, and a listing of originals and versions published through 1939 with their captions, see menus on right. 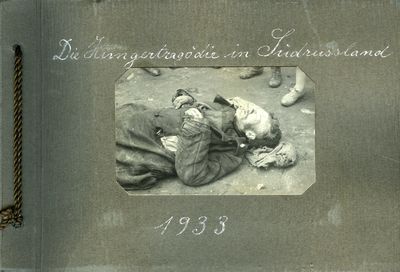