Creator
Wienerberger, Alexander, 1891-1955, Photographer
Media Type
Image
Text
Item Types
Photographs
Photograph albums
Description
We are shown a group of people consisting primarily of women and children with a handful of men at the lead. Ahead of all is a horse drawn wagon, too distant to see what is carried in it. Almost everyone is carrying a sack over their shoulder, and some carry extra outerwear. Some are walking barefoot. The bags may hold a very few personal essentials, and quite likely some things to sell or trade for food. Wienerberger wrote in his memoir that these people are starving rural residents heading out to the city "um hier Hilfe, Brot, Arbeit oder Erbarmen zu finden" [to find help, bread, work or mercy]. (Hart auf Hart, p.180). 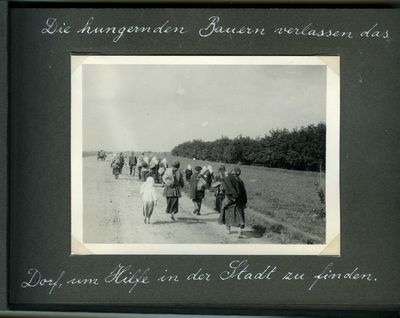