Creator
Wienerberger, Alexander, 1891-1955, Photographer
Media Type
Image
Text
Item Types
Photographs
Photograph albums
Description
A young girl wearing a traditional white head scarf lies dead and alone on a set of stairs near one of the rivers that intersect Kharkiv. (Kharkiv historians consider it may be the Lopata River). Wienerberger shows the feet of a man walking past her and another man standing not far away. Although she and a few other people are wearing coats, one can see in the distance that some people are bathing in the river, while some sit on the river’s edge. 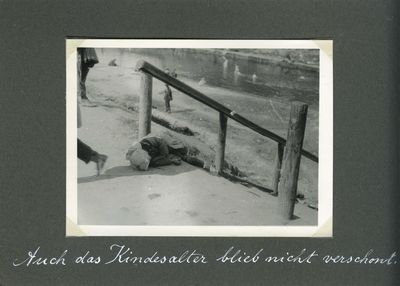