HREC website → Home (Advanced) → What's New → Details
A starving farmer tries to lean on an elbow as he lies near a house in Kharkiv (Death by starvation series, no. 2)
Description

Creator
Wienerberger, Alexander, 1891-1955, Photographer
Media Type
Image
Text
Item Types
Photographs
Photograph albums
Description
Death by starvation series, no. 2. This is the second in a sequence of 4 photos which Alexander Wienerberger compiled into a brief series to portray how the starving people from the farms and villages ultimately succumb and die after finding no relief in the city of Kharkiv. The photographer states in his memoir Hart auf hart, that the photos were taken across a period of 6 days, documenting the toll of starvation on the life of one particular farmer.

The farmer depicted in PD18 (http://vitacollections.ca/HREC-holodomorphotodirectory/3636386/data ) now lies in the vicinity of the same house, but seems to be in a very weakened state. His tattered coat is buttoned up to his chin, his hat and a can are visible near his left leg, and a walking stick lies under his left arm. 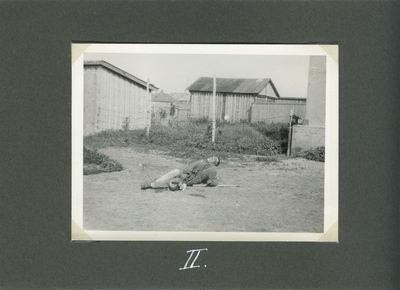