Creator
Wienerberger, Alexander, 1891-1955, Photographer
Media Type
Image
Text
Item Types
Photographs
Photograph albums
Description
Wienerberger calls our attention to a sign posted on a tree in a Kharkiv city park. The sign reads in Russian: “Здесь категорически воспрещается производить похорон,” which translates as: “It is strictly forbidden to bury the dead here.” Apparently this is in response to people attempting to provide a respectful burial for their loved ones in the park, because local cemeteries were overflowing and they had no private yard. In other instances, perhaps the family did not have the means to transport the deceased family member back to their home village.

As a side note: The sign in Russian provides evidence that the earlier “Ukrainization” policy of requiring the Ukrainian language to be used in official communications had been dropped in practice by this time (Martin, Action Empire, 122). As of December 1932, Ukrainization was officially halted; in essence, the Politburo decided that Ukrainization in fact promoted anti-Bolshevik nationalism (Martin, 307-8). 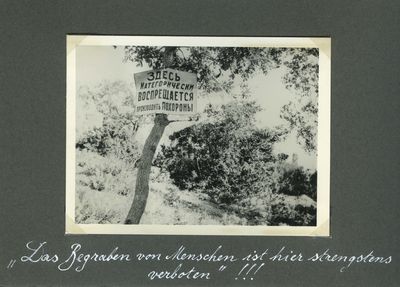