Creator
Abbe, James, 1883-1973, Photographer
Media Type
Image
Item Types
Photographs
Book illustrations
Description
We see a crowd gathering in front of a food ration distribution center specifically designated for the dam workers and their families. It is not yet open for business, according to the photographer. The newly completed Dnipro Hydroelectric Dam is in the background.

The building of the Dnipro Hydroelectric Dam, the largest such structure in Europe, was a massive undertaking begun in 1927 that involved tens of thousands of workers. Because of chronic shortages in housing, food, and medical assistance, worker morale tended to be very low and turnover extremely high. Completion of the dam by the end of the first Five Year Plan was the goal, however, regardless of human cost.
In the end, the completion of the dam was a monumental achievement that served to symbolize the USSR as an advancing world industrial power.

For further information on: Availability and access to food in urban and industrial areas, see "Context Note" under Related Features at right. 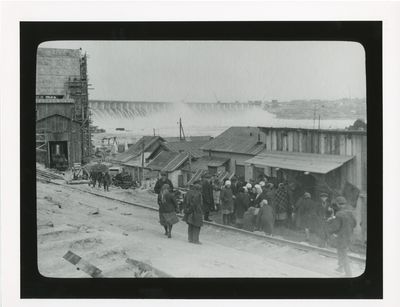