Creator
Abbe, James, 1883-1973, Photographer
Media Type
Image
Item Types
Photographs
Book illustrations
Description
These youngsters look pleased to be photographed by Abbe alongside their tiny living quarters built into an embankment. We see blankets hanging outside, as well as bulky belongings stacked against the outside walls. The photograph was taken in 1932, the year the dam was officially opened, and most of the related construction completed. Therefore, it is likely this “temporary housing” has been around for several years. The buildings in the background probably served as offices for the higher level engineers, the worker’s canteens, or similar functions.

The building of the Dnipro Hydroelectric Dam, the largest such structure in Europe, was a massive undertaking begun in 1927 that involved tens of thousands of workers. Because of chronic shortages in housing, food, and medical assistance, worker morale tended to be very low and turnover extremely high. Completion of the dam by the end of the first Five Year Plan was the goal, however, regardless of human cost.

Inscriptions
Caption on photo: [no caption.]
Caption in I Photograph Russia: "Be it ever so humble...This picture shows the homes of the workers on the Dnieperstroy dam and, his back turned, the child of one of them." 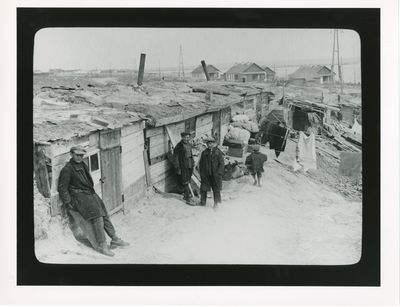