Creator
Wienerberger, Alexander, 1891-1955, Photographer
Media Type
Image
Text
Item Types
Photographs
Photograph albums
Description
Three men, most likely from the countryside are seen near the center of the city. One lies dead; a few feet away, a man sits leaning against a picket fence, watching over his companion who lies in apparent distress or near death by his side. Two women are walking in the street in opposite directions. The one nearer the sidewalk is seen looking over at the men. The woman in the foreground, at this point, is looking straight ahead down the street. We can see a visible tear in her shawl, a loose sole on one of her shoes.

A differently cropped version of this photo is published in both editions of Ammende’s Muss Russland Hungern, and is displayed in the Red Album. That version shows an additional woman on the street, heading right, and more background at the top of the photograph which can serve to better identify the location of the photograph. Kharkiv historians state that the edifice behind the fence is the Ozeryansʹkyy Orthodox church in the Kholodna Hora (Cold Mountain) section of Kharkiv.

For further information on: Starving rural migrants and urban residents in Ukraine, see "Context Note" under Related Features at right.

For related photo, essays, and a listing of originals and versions published through 1939 with their captions, see menus at right.
Inscriptions
Handwritten caption in album: “In allen Stadien des Verhungerns.” [In all stages of starvation.]
Date of Original
spring-summer 1933
Image Dimensions
Image Width: 10.8cm
Image Height: 7.9cm 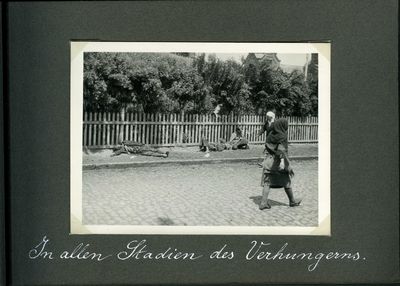