Creator
Abbe, James, 1883-1973, Photographer
Media Type
Image
Item Types
Photographs
Book illustrations
Description
18 people at a dinner party gather around the table for a photo. Most of them are dressed somewhat formally and clearly have enjoyed an evening with plenty of specially prepared foods and a variety of alcoholic beverages. Abbe, distinguished as the first foreigner to be permitted to photograph Stalin, was a frequent guest at such functions.
Since it was obviously posed, this was not a “forbidden” photograph. However, like many recorded experiences shared with important visitors from abroad, it would not be published in any medium for the general Soviet public.

In his I Photograph Russia, Abbe described numerous examples of the barely secret bourgeoisie elitist lifestyle of the top Party leaders and heads of the various state industries, particularly in Moscow. Even in the coal mining districts of the Don Basin, proletarian pretenses were cast aside when the intent was to impress important visitors. However, all but the most trusted visitors were expected to promise not to publish anything critical about their experience if they wanted to accomplish their mission in the USSR.
Notes
Source: James Abbe Archive. No. 4107.
Also published in: Abbe, James. I Photograph Russia. New York: R. M. McBride, 1934, f.p.253.

Inscriptions
Caption on back of photo: “Russia coal-region hospitality for foreigners. Donetz Basin (in famine belt)”
Caption in I Photograph Russia: "While the peasant starves, our distinguished foreign visitor fares very nicely...especially if he signs an affidavit stating that he has seen no famine in the Don Basin." 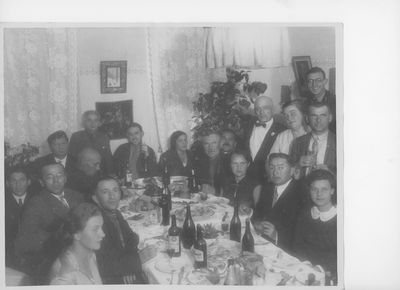