Media Type
Text
Description
James Abbe, an American professional photographer who first gained considerable fame immortalizing celebrities of the early cinema of the 1920s, started shifting his focus to a broader range of publication preferred version photo journalism by the late 1920s. He covered the Mexican Civil War, gangsters in Chicago, and numerous stories from Moscow during his first trip to the USSR in 1927. In 1932, he returned to Moscow with his family in order to score a first photo portrait by a Westerner of Stalin in the Kremlin. This achievement earned him greater access to a variety of opportunities to mingle with the communist elites, to observe the shocking realities of life among “peasants” and the proletariat, and to experience firsthand the lengths to which the regime went to control the public image of the Soviet Union. His persistent efforts to photograph scenes from a long list of forbidden subjects led to multiple arrests, however, and he was finally asked to leave, having spent seven months in the USSR. Employing a variety of clever tactics, Abbe succeeded in returning to the US with most of his hundreds of photo negatives.
The small collection presented here consists of 4 photographs, (one photo is also represented with “forbidden” stamped across it for editorial emphasis), and are reproduced from original prints courtesy of the James Abbe Archive https://www.jamesabbe.com/ . All were taken in 1932 and are included among the 80 photographs, mostly from Russia, that illustrate his fascinating 1934 memoir of his Soviet experience, I Photograph Russia. Additional photographs exist from Abbe’s visits to Ukraine in 1932, but most do not relate directly to Holodomor conditions.
In the closing pages of I Photograph Russia, Abbe admitted that there were many photographs that circumstances made it simply impossible for him to capture, images “exposed…on my brain.” For example: “ A herd of Ukrainian peasants being driven to the GPU stockyards: a winding dusty road leads to a local jail from which these resigned looking bearded men who wouldn’t ‘build Socialism’ are to be shipped off on the train, too far away from their native section ever to attempt to return….” Or another instance: “The main street of this little Ukrainian village, some eight miles from the gorgeous Dnieperstroy Dam. A crumpled figure lying on the curb resting – in eternity. He was too hungry.” [1] 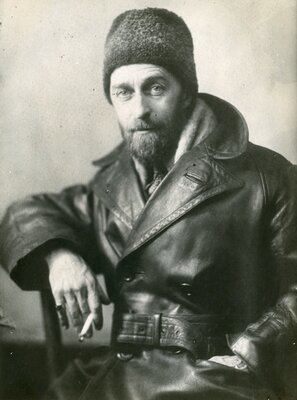