The author Heorhii Temtsunik was roughly 13 at the time of the famine. He mentions that his village Holoskovo used to belong to Odesa oblast and is now part of Mykolaiv oblast.


His letter addresses three main themes. Cannibalism: He mentions that food made from human meat was sold at a farmer's market; police found 18 skulls in someone's attic; Hryhorii Chechelnytsky of the village of Onyskove tried to cut his 10-year old son's throat but the boymanaged to get away. The attacker was caught and buried alive by fellow villagers as an act of vigilante justice; a veterinarian from the village of Lushniuvate (Kirovohrad oblast) managed to get away from people trying to kill him.
Survival strategies: His family survived because they had 6 beehives. His big brother used a gun to kill rats. He mentions a soup made with sparrows that was edible, while the one made with ravens was like "black tar." Other items on "Stalin's menu" included horses, cats, dogs, bark, cane root, orach, etc. Mock executions were practiced by the "recruiters" for the "SOZ", an early predecessor of the collective farm. People would die afterwards from shock.


No justice for victims: his father perished in 1937 repressions in Rybinsk camps while "cannibal" Kaganovych is alive and lives in Moscow and "the party and Soviet government" allow it. 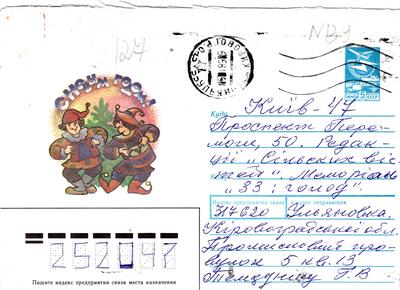