Creator
Bokan, Nikolai, 1881-1942, Photographer
Media Type
Image
Text
Item Type
Photographs
Description
A photo display board created by Nikolai Bokan at an unknown date but presumably between 1933 and 1937. The photos feature corpses of individuals who had lived in Baturyn, Chernihiv oblast, and the surrounding region. Each photo is accompanied by the name of the deceased and a description of the cause of death.

Among the photos is one featuring the corpse of Konstantin Bokan lying in a coffin. Konstantin died of starvation in June 1933. The description on the display board states that Konstantin had left his father and trusted the “exploiters,” a reference to the authorities of the collective farm.

In the few months prior to his death, Konstantin had been working on a collective farm where he had been overworked and poorly fed. He had left his family home earlier in the spring of 1933, as his parents were struggling to provide for their large family during the famine. It is unclear whether Konstantin was asked to leave or whether he left of his own accord. Konstantin would have been around twenty-two years old at the time of his departure from the family home.

The board also features the corpse of a peasant, Lazebny, who is said to have been killed during the process of dekulakization. Another photo features a group of individuals seated on a bench, surrounded by Soviet authorities in uniform. The description explains that the individuals were sentenced to death for seeking vengeance against the authorities for the seizure of their property.

The deceased Lazebny and the group of peasants were likely killed for their resistance to the forced collectivization of agriculture, mandated by the Soviet Union’s first Five-Year Plan. Private farms were abolished, and state-owned and collective farms were established in their place. At the same time, successful, well off-farmers, labelled kulaks (according to the Soviet regime, these were exploiters of poorer peasants), were persecuted, stripped of their possessions, arrested, deported, and some even executed -- a process referred to as “dekulakization.” In practice, any farmer opposed to collectivization could be labelled a kulak or kulak supporter.

The typed pages surrounding the photos on the display board include excerpts from Chapter 33 of the renowned Russian writer Leo Tolstoy’s book "On Life." The philosophical writings of Tolstoy were the basis of the Tolstoyan movement, of which Bokan was an adherent. The Tolstoyan movement promoted values of non-militarism, vegetarianism, and moral improvement, and aspired for the attainment of a rural, self-sufficient livelihood.

The display board also features a photo of the corpse of Leo Tolstoy, who died in 1910. It can be assumed to be a reproduction and not originally captured by Bokan. Also featured is a photo of the remains of Kirill Razumovski in his crypt. Razumovski was the last hetman of the Ukrainian Cossack state (1750-64), appointed by the Russian Empress Elizabeth. Razumovski’s inclusion in the photo display board can presumably be attributed to the fact that he died in Baturyn, Chernihiv oblast, in 1803. Razumovski’s crypt had been opened in 1927 by the director of the local Konotop museum, and photographs were reportedly captured by a photographer with the surname Khain. It is unclear whether the photo on the board is a reproduction of Khain’s, or whether Bokan gained access to the crypt and took the photo himself. 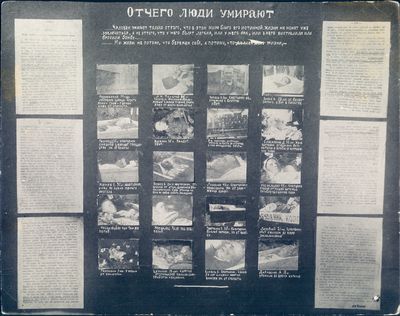 P7: Peasants sentenced to death for seeking vengeance against the authorities.