Creator
unknown, Photographer
Media Type
Image
Text
Item Type
Photographs
Description
The story is unknown behind this shocking image of a family - perhaps stowaways, found dead in a railroad box car. There have been no authenticated photos from the Holodomor that show a family that has died of famine. However, it is one of many tragic scenes captured on film during the massive relief effort that was quickly organized in 1921 to help the starving regions of Russia and later, Ukraine. As part of the relief mission, food warehouses and temporary medical facilities were erected, transport logistics were developed and implemented and large numbers of outside volunteers came to train and support local residents in medical assistance and to help in the distribution of food and medical supplies. All these efforts, including the conditions of the victims that were found, dead or alive, were carefully documented.

Notes
Photo source: Bildarchiv [File 68/62/7A]: Bundesarchiv, Koblenz, Germany.
A small print of this photograph is part of a collection of Russian famine photos from the Volga region which was in the possession of Dr. O. Fischer. Each photo bears his signature, includes a caption, and is dated March 1922 on the back of the photo. The photographs were later donated to the Bundesarchiv.

For further evidence of the 1920s origins of this photograph, please see Related Features at right.
Inscriptions
Caption: “Wolgagebiet, Eine auf der flucht begriffene, in einen Eisenbahnwaggon gestorbene Familie.” [in the Volga region, a family on the run is found dead in a railway car.]

Terms of Use
"Weitergabe dieser Aufnahme nicht gestattet" [Dissemination of this reproduction is not permitted]. For any use beside private study, contact the Bildarchiv: Bundesarchiv, Koblenz, Germany for permission.
Reproduction Notes
Permission pending; 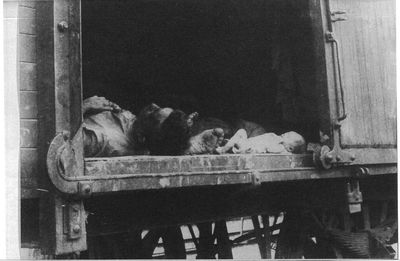