Nikolai Bokan: a Biographical Essay
Main Menu → Previous Panel → Next Panel
The Criminal Case File
Panels
IntroductionThe Criminal Case FileThe TrialThe Bokan FamilyNikolai Bokan's Life Pre-FamineFamine (1932-33)TolstoyanismPhotography
Links
View the "Nikolai Bokan Collection"
In the fall of 1937, Nikolai Bokan and his son Boris Bokan were arrested and charged with anti-Soviet propaganda and agitation. In 1938, they were sentenced to hard labour in the Far East, where Boris died in 1939 and Nikolai in 1942. Information about the Bokan family and their experience of famine was gleaned from Nikolai and Boris' criminal case file, housed at the Archive of the Security Service of Ukraine.
Although the case file was assigned to both Nikolai and Boris, the majority of the personal items confiscated as evidence and included in the file belonged to Nikolai. These include photographs, correspondence, an unfinished memoir, and a notebook of reflections. The latter two items are presumed to have been written in the mid- to late 1930s. The file also contains official Soviet trial documents, including verdicts, appeals, and interrogation reports. As part of the trial investigation, interrogations were conducted with the two accused as well as with a number of family members and acquaintances – notably, Dr. Klym Teslia, who prepared Konstantin Bokan’s death certificate, as well as Nikolai’s estranged children, Lev-Leonid and Anna Bokan. In addition to individual photos, the case file also contains photo display boards created by Nikolai between 1931-1936. The display boards are compilations of photos together with inscriptions that offer narratives about the life of the Bokan family and commentaries on broader societal developments. Nikolai is known to have prepared these boards for dissemination, sharing them with others in the surrounding region. The boards’ reception among Nikolai’s acquaintances is unknown, although the boards and the photographs figured prominently in his trial as evidence of his engagement in anti-Soviet propaganda.
This biographical exhibit is an attempt to reconcile these materials and to understand how the famine figured in the broader story of Nikolai’s life and that of his family. As the research was conducted for the purpose of this photo directory, the famine-related photos were the starting point for the project. Other documentary materials in the file were consulted to contextualize the photos, to illuminate the complex realities from which they emerged, and to better understand the lives of the photographer and his family. 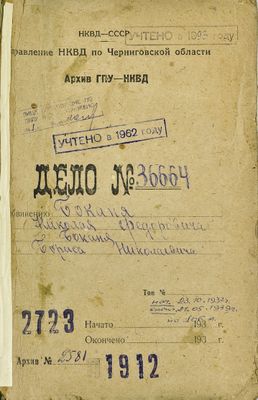 Cover of the case file of Nikolai and Boris Bokan Details 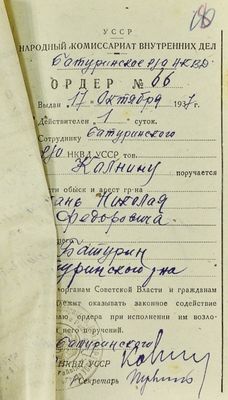