Creator
Wienerberger, Alexander, 1891-1955, Photographer
Media Type
Image
Text
Item Types
Photographs
Photograph albums
Description
We see a new mass burial site on the edge of the city, similar to that portrayed in PD22 (http://vitacollections.ca/HREC-holodomorphotodirectory/3636403/data ), with numerous mass graves for the unnamed victims of famine found on the streets of Kharkiv. On the right, we see homes hidden behind a row of trees. A village is seen on the horizon. In the mid-distance, a gravedigger is barely visible, resting by a new pit he is digging.

For essays and a listing of originals and versions published through 1939 with their captions, see menus at right.
Inscriptions
Handwritten caption in album: “Massengräber für die Verhungerten.” [Mass graves for the victims of starvation.]
Date of Original
spring-summer 1933
Image Dimensions
Image Width: 10.8cm
Image Height: 7.9cm 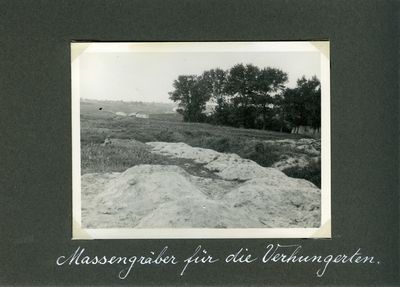