Nikolai Bokan: a Biographical Essay
Main Menu → Next Panel
Introduction
Panels
IntroductionThe Criminal Case FileThe TrialThe Bokan FamilyNikolai Bokan's Life Pre-FamineFamine (1932-33)TolstoyanismPhotography
Links
View the "Nikolai Bokan Collection"
This exhibit was prepared by Anastasia Leshchyshyn and Daria Glazkova (published June 2020).
Nikolai (Mykola) Fedorovich Bokan (1881–1942) was a photographer from Baturyn, Chernihiv oblast, in Soviet Ukraine. Among Nikolai’s surviving photos are those that document his family’s experience of the Holodomor, and notably the death of his son Konstantin from starvation. Nikolai’s photos offer a uniquely personal perspective on the experience of famine and speak to the famine’s devastating impact on family dynamics amid broader social and political transformations. As Nikolai was a devoted member of the Tolstoyan movement, which was based on the religious and political writings of Leo Tolstoy, his writings and photos also provide insight into the fate of religious groups amid Soviet-era repressions.
The criminal file of Nikolai Bokan was found in 2007 in the Ukrainian city Chernihiv in the local archives of the Security Service of Ukraine. Vasyl Danylenko and Vyacheslav Vasylenko, researchers from the Security Service Archives in Ukraine's capital, had traveled to Chernihiv to attend the opening of a traveling exhibition on the Holodomor titled "Declassified Memory." There they learned from the head of the Chernihiv Security Service archival department of the existence of a criminal file containing rare photos taken by a repressed photographer who had recorded life during the Holodomor. Recognizing the value of the file, the Kyiv-based researchers brought the material to Kyiv, where its contents were featured in the exhibition on declassified memory. The file is now part of the fonds on rehabilitated persons in the Security Service Archives in Kyiv. 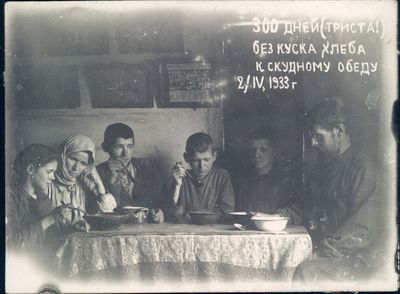