Home (Advanced) → What's New → Details
Boris Bokan is visited by his father and brother in prison, where he had spent over a year as punishment for opposing conscription into the Soviet army.
Description

Creator
Nikolai Bokan, 1881-1942, Photographer
Media Type
Image
Text
Item Type
Photographs
Description
Boris Bokan (centre) is visited by his father, Nikolai Bokan (right), and brother Lev-Leonid (left) in prison, where he had spent over a year as punishment for opposing conscription into the Soviet Army. The trio are seen seated on the ground in a dirt enclosure surrounded by uncultivated plants. A straw bag lies beside Nikolai Bokan, perhaps used to carry the camera equipment and other provisions. All are wearing caps and are dressed for colder weather.

Boris had embraced pacifist values, although unlike his father, his inspiration came from an interest in anarchism rather than religion. Boris spent over a year (1931-1933) under arrest, first imprisoned in the Far East and subsequently in Konotop, near Baturyn. In a letter to Vladimir Chertkov, a prominent Tolstoyan, Nikolai Bokan claimed that his son received a longer sentence for the crime than was imposed elsewhere in Russia. After his arrest, when Bokan was asked about the letter under interrogation, he reportedly implied that the mentioned discrepancy in sentencing was rooted in discrimination based on nationality or social status

In the mid 1910s, Nikolai Bokan was conscripted into the Soviet Army. As a result of his pacifist position, he was assigned the role of military photographer, which allowed him to avoid the handling of weaponry.

October 4, 1932
Father and brother visiting the imprisoned [brother] who refused to serve in the army. 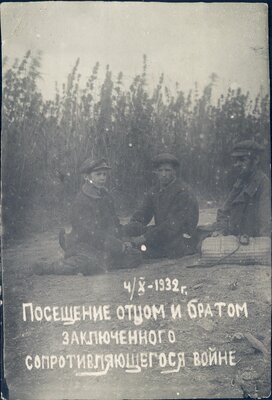