Creator
Bokan, Nikolai, 1881-1942, Photographer
Media Type
Image
Text
Item Type
Photographs
Description
A photo display board created by Nikolai Bokan in 1937. It features portraits of six of Bokan’s seven children, paired with photographs that capture the consequences of each child’s defiant actions against their father, notably for his insistence that they embrace Christianity (see transcription and translation section for details).

Among the photos is one featuring the corpse of Konstantin Bokan lying in a coffin. In the inscription, Nikolai Bokan notes an incident five days before Konstantin’s death, when Konstantin blamed his father for the lack of food. He claims that Konstantin expressed his conviction that he would be better provided for elsewhere and declared that he would not share any of his profits with his father.

Konstantin died of starvation in June 1933. In the few months prior to his death, he had been working on a collective farm where he was overworked and poorly fed. He had left his family home earlier in the spring of 1933, as his parents were struggling to provide for their large family during the famine. It is unclear whether Konstantin was asked to leave or whether he left of his own accord. Konstantin was most likely around twenty-two years old at the time of his departure from the family home.

In the display board, Nikolai further expresses his regret that his children had renounced the Christian values that were integral to their upbringing. He was an adherent of the Tolstoyan movement, which was based on the philosophical and religious writings of Leo Tolstoy. Tolstoy’s views were formed by the study of the ministry of Jesus. The movement promoted values of non-militarism, vegetarianism, and moral improvement, and aspired for the attainment of a rural, self-sufficient livelihood. Among Nikolai's children, only Boris appears to have briefly engaged with Tolstoyan philosophies.

Bokan claims that his children were influenced by members of a morally corrupt clergy who were incapable of imparting the true tenants of Christianity to the public. Bokan appears to conflate the perceived moral corruption of the clergy with the Soviet authorities’ promotion of atheism, both of which he labels as “anti-religious.” He saw both as opposed to Tolstoyan religious and moral principles. Notably, although Tolstoyans identified as Christians, they generally did not belong to an institutional church.

Bokan had homeschooled most of his children in keeping with his skepticism toward public education and distrust of the state. Bokan explains in the display board that some of his children were resentful about this homeschooling, as it subsequently prevented them access to certain advantages in Soviet society.

These dynamics within the Bokan family occurred amid widespread anti-religious sentiment propagated by Soviet authorities beginning in the late 1920s as a means of disseminating atheism and promoting loyalty to the state. These anti-religious campaigns coincided with the beginning of the forced mass collectivization of agriculture.

Inscriptions
A transcription of the Russian text and English translation are available in the "Inscription Details" document on the right-hand side of the screen.
Date of Publication
1 Oct 1937
Image Dimensions
Image Width: 10cm
Image Height: 15cm 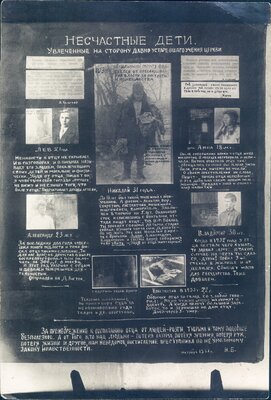