Creator
Williams, Whiting, 1878-1975, Photographer
Media Type
Image
Text
Item Types
Photographs
Newspaper illustrations
Description
Williams presents us with a wide range of elements to contemplate: In the foreground stands a smartly attired traffic officer – his hat and tunic a striking white. A boy of around 10 in a sleeveless undershirt grins at the photographer as he gives the officer’s tall leather boots a brisk shine. A few men wait while another leaves with what appear to be a drink in hand from a concession that is hidden from view, but bears a large sign saying “Води” meaning beverages in this case.

In the background looms the Держпром or Derzhprom, (Gosprom in Russian), the State Industry Building. It was designed and built in the late 1920’s to provide Kharkiv, the newly designated capital of the Soviet Ukrainian Republic an appropriately impressive, innovative Soviet style structure for the administrative offices of its numerous government owned industries, or “trusts,” as well as other government departments. Williams comments that there are hardly any automobiles visible nearby; just a year earlier, photographer James Abbe (Abbe, I Photograph Russia, fp 285) shows the Derzhprom with a row of horse-drawn cabs in the foreground.

Williams states in his travel journal that he was accompanied for much of his 1933 journey by an official Soviet tourist guide, who no doubt escorted this Kharkiv excursion. The impressive Derzhprom, like the smartly dressed traffic officer with no traffic to direct, are but two examples of the lengths to which Stalin’s government went to present a façade of power, progress and prosperity.

Notes
This photo, taken August, 1933, was used to illustrate “My Journey Through Famine-Stricken Russia,” (February 24, 1934, p.17), the first of two articles by Whiting Williams that ran in a London weekly titled Answers.

The original photograph and the published version are both shown.
See Special Features menu to link to the article.
Inscriptions
Williams' caption on back of photograph: “The offices of the various Government ‘trusts’ or employing companies in the Republic of the Ukraine, and a traffic cop – everything splendid except that, outside street cars and official autos, there’s no traffic.” 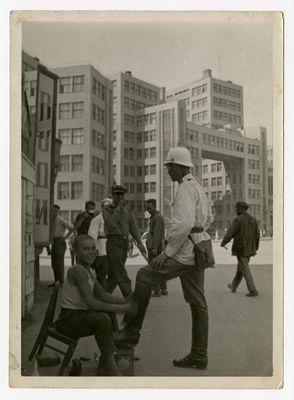