Home (Advanced) → What's New → Details
A starving farmer sits by the side of a house in Kharkiv (Death by starvation series, no. 1)
Description

Creator
Wienerberger, Alexander, 1891-1955, Photographer
Media Type
Image
Text
Item Types
Photographs
Photograph albums
Description
Death by starvation series, no. 1 This is the first in a sequence of 4 photos which Alexander Wienerberger compiled into a brief series to portray how the starving people from the farms and villages ultimately succumb and die after finding no relief in the city of Kharkiv. The photographer states in his memoir Hart auf hart, that the photos were taken across a period of 6 days, documenting the toll of starvation on the life of one particular farmer.

In this first photo, Wienerberger shows us a destitute old farmer sitting in the yard of a small house. He is wearing a winter hat, tattered winter clothing, and his legs are wrapped in cloth strips. It is not clear what he is holding in his hand. A walking stick is barely visible, lying behind him.

This is one of 25 photographs depicting life and death in and around Kharkiv during the Holodomor that the photographer put together in a small album with a handwritten title: Die Hungertragödie in Südrussland 1933 He presented the album to the Roman Catholic Cardinal Theodor Innitzer of Vienna in 1934 as an expression of appreciation for the Cardinal’s efforts in trying to organize an international campaign to assist the victims of starvation in 1933. The album is housed in the collections of the Diözesanarchiv, Vienna, Austria. 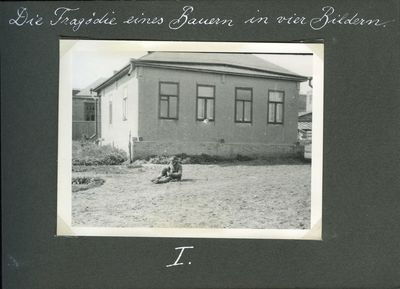