Home (Advanced) → What's New → Details
A farmer is dying of starvation near a house in Kharkiv. (Death by starvation series, no. 3)
Description

Creator
Wienerberger, Alexander, 1891-1955, Photographer
Media Type
Image
Text
Item Types
Photographs
Photograph albums
Description
Death by starvation series, no. 3. This is the third in a sequence of 4 photos which Alexander Wienerberger compiled into a brief series to portray how the starving people from the farms and villages ultimately succumb and die after finding no relief in the city of Kharkiv. The photographer states in his memoir Hart auf hart, that the photos were taken across a period of 6 days, documenting the toll of starvation on the life of one particular farmer.

The farmer depicted in PD18 (http://vitacollections.ca/HREC-holodomorphotodirectory/3636386/data) and PD19 has shifted back to the same location by the house as in PD18, lying in a state of misery. His hat is back on his head and he holds his can (or cup) in his left hand.

For essays and a listing of originals and versions published through 1939 with their captions, see menus at right.
Inscriptions
Handwritten caption in album: "III."
Note: the first photo in the series has the caption: “Die Tragödie eines Bauern in vier Bildern. I.” [The tragedy of a farmer in four pictures. I.] See PD18.
Date of Original
spring-summer 1933
Image Dimensions
Image Width: 10.8cm
Image Height: 7.9cm 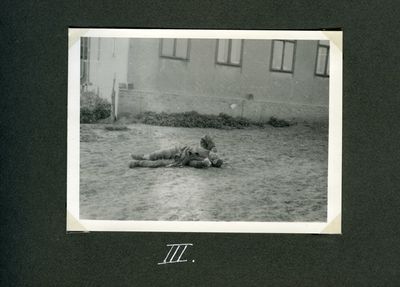