We the undersigned, on behalf of all members of the Royal Canadian Ordnance Corps, desire to express to you our appreciation of the honour you have brought to the Corps in accepting the appointment of Honorary Colonel. When we recall the great contribution you made to the common cause during the crucial days of 1941 and 1942 while holding the office of Master-General of the Ordnance, we consider it most fitting that you have consented to accept this appointment. The Corps at the time you accepted the appointment was small and inadequate for the work which lay ahead. The urgent need for the modernization and mechanization of the weapons of war, and for the mobilization of huge resources required to wage war, confronted confronted you with almost overwhelming complexities. Time was precious in the dark days of of the early part of the war, but under your able direction and guidance the progressive development and re-organization of the Royal Canadian Ordnance Corps was accomplished with a minimum of delay, ensuring the availability of trained man power to provide and maintain the ritual supplies of all types of Canadian war equipment furnished to our own forces and also to many of our Allies, which assisted them so greatly in fighting through to final victory. In the regimental life and prestige of the Corps, an appointment of this nature carries much weight and importance, and in obtaining the services of a gentleman of such distinction, we have indeed been most fortunate. We know that your name at the head of our Regimental List of Offices will do much to foster the ambitions of the Royal Canadian Ordnance Corps in its future efforts. It is our earnest hope that you will long remain our Honorary Colonel.
Local identifier
C3AK
Copyright Statement
Copyright status unknown. Responsibility for determining the copyright status and any use rests exclusively with the user.
Contact
Cobourg Museum Foundation
Email:info@cobourgmuseum.ca
Website:
http://www.cobourgmuseum.ca
Agency street/mail address:
c/o Victoria Hall, 55 King Street West
Cobourg, ON K9A 2M2 Phone number: 19053737222 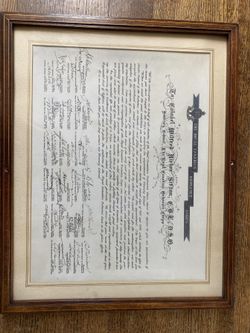