Media Type
Image
Item Type
Maps
Description
This detail map is based upon a map that was downloaded from the Archives of Ontario. The detail map provides greater clarity than with the original one that is currently available in this CTPL archive record. The original map that is available here does not have zoom capabilities but provides the context for it as an original document - see the Pages box at top of this page and click the downward pointing select arrow to access the additional pages. The lower right hand side of the map shows the Colborne area which notes property lots with owner's name - Joseph Keeler, Isaiah Hall, John Alyea and John Ogden. Colborne Creek and Salem Creek are also included in the map.


The information below was copied from the Archives of Ontario.

"Description of File or Item:
Title
Cramahe Township
Dates of Creation
[178?]-[ca. 1978]
File/Item Ref. Code
RG 1-100-0-0-362
File or Item Forms a Part of
This file or item forms a part of the following group of records:
RG 1-100 Patent plans
Click on the reference code above for information about this group of records.
Restrictions on the Group of Records of which this File/Item forms a Part
Some material may be closed for conservation reasons.
Location and ordering information
To view, order RG 1-100 , barcode D020086.
Take note of this information for retrieval of this item. To help you find what you need, also note the File/Item Ref. Code and/or the Creator Ref. shown above.

Ontario Government Record Series RG 1-100
RG 1-100 Patent plans
http://ao.minisisinc.com/SCRIPTS/MWIMAIN.DLL/122568115/DESCRIPTION_WEB/REFD/RG~201-100?JUMP
Title
Patent plans
Dates of Creation
[178?]-[ca. 1978]
Physical Description
4201 plans
Scope and Content
Series consists of plans showing the status of Crown lands, whether patented, leased, or under a license of occupation. Until the late 1970s, patent plans were used within the Ministry of Natural Resources as a quick reference tool to show the alienation of Crown land. Once this information was computerised, the patent plans became redundant, and they were transferred to the Archives of Ontario.
At the time a survey was completed and a survey plan created, an extra copy of the plan was prepared. Whenever a lot or a portion of a lot was patented, the patentee's name was inscribed on the plan in the appropriate place and the lot normally was marked with a "D" for "described". At times, other information such as a land file number (See Series RG 1-246), an order-in-council number, a licence number or a lease reference also was included. Later survey plans were obtained from other government sources such as land registry offices.
Several patent plans may exist for a town or township, and the information provided may vary among the plans. The series also includes Subdivision plans, which are plans that subdivide land of existing lots into two or more new lots; or, the consolidation of two or more existing lots and their simultaneous redivision along new boundaries into two or more new lots. Subdivision plans include a prefix "M" before the number of the plan.
Particularly in the pre-Confederation period, these plans were used to record locations on land made for grants and sales. Often, however, the individuals named on the plans did not follow through with obtaining a patent on the land. Thus, in order to confirm that a patent was actually issued, it is necessary to examine other sources such as various indices to land patents. (See Inventory 52 for descriptions of these indices).
Administrative History or Biographical Sketch
Click on the link(s) below for more information.
Quebec (Province, 1763-1791). Surveyor General's Office
Upper Canada. Surveyor General's Office
Canada (Province). Crown Lands Dept.
Ontario. Dept. of Crown Lands
Ontario. Surveys, Patents and Roads Branch
Ontario. Surveys and Patents Branch
Ontario. Dept. of Lands and Mines
Ontario. Dept. of Lands, Forests and Mines
Ontario. Dept. of Lands and Forests. Surveys Branch
Ontario. Lands Branch
Ontario. Dept. of Lands and Forests
Ontario. Division of Land and Recreational Areas
Ontario. Dept. of Lands and Forests. Division of Lands
Ontario. Lands and Surveys Branch
Ontario. Lands and Waters Branch
Ontario. Ministry of Natural Resources
Ontario. Lands Administration Branch
Restrictions on Access
Some material may be closed for conservation reasons.
Terms For Use and Reproduction
Copyright is primarily held by the Crown. No restrictions on reproduction. Permission of the Archives of Ontario is required for publication; submit a Request for Permission to Publish, Exhibit or Broadcast Form.
Immediate Source of Acquisition
These records were acquired via direct transfer from the Ministry of Natural Resources, Land Management Branch, in 1979.
Related Material
See the following series for further information on land patents: Series RG 53-1, Land patents; Series RG 53-2, Indexes to land patents by districts; Series RG 53-3, Cancelled land patents; Series RG 53-52, Land patents - Free grants; Series RG 53-53, Land patents - School land sales; Series RG 53-54, Land patents - Militia grants; Series RG 53-55, Index to land patents by township; and Series RG 53-56, Index to land patents by name.
Notes
The dates in the online list do not reflect the dates of creation of specific maps. The records were constantly updated while they were held by the Ministry of Natural Resources.
Former Codes
Series RG 1-100 formerly was Series RG 1 C-I-10.
Finding Aid
An online list is available for this series." 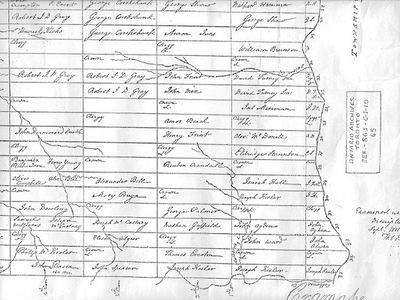