Artifact no.
2008.0661.001
Model
Fountain Brand Tomatoes
Model AKA
Standard Quality
Manufacturer
Miller Litho Co. Ltd.
Manufacturer Location
Toronto, Ontario, Canada
Context Function
Print specimen for 28 fluid oz. can.
Context Technical
Represents the production processes in commercial engraving and lithography from the late 19th century through to the mid-20th century. The Frederick Martin tools and the gravure plates represent the craft of copper plate engraving in its traditional form. This consisted of cutting a design into the polished face of the plate, either exclusively with hand tools or with some degree of etching. After the plate was inked and thoroughly wiped, ink remained in these low lying areas. This ink was transferred to the paper when plate and paper were placed under pressure in a press (e.g. the Kelton press). The Frederick Martin tools include devices used both in engraving (gravers, scrapers and burnishers) and in etching (hand clamp). Engravers were assisted by the ruling machine to expedite laying down parallel lines and the pantograph (e.g. 1969.1286) to facilitate copying from a drawing, original plate, or master template. While no evidence of these devices is found among the Frederick Martin tools, it is likely that some of the plates were produced at least partly with them. Lithography is a process that does not rely on an elevated or recessed area to carry ink on the plate. Instead, in traditional lithography the image is applied to a polished, fine grained slab of limestone with a grease based ink. The stone is then dampened with water so that the stone can be repeatedly reinked without ink adhering to the nongreasy portions of the stone. The stones and early label specimens in the Art Alder collection represent this traditional form of lithography. The image was drawn on the stone directly with pen and grease pencil or by scratching through a gum coating to expose the ink absorbing stone in selected areas. Generally, these small stones carrying the original image were not placed in the press. Instead, images from several were applied to a final press stone by the use of transfer paper. It is this type of small, transfer stone that we are acquiring. In colour, or chromo-, lithography, a separate stone was required for each colour, with the sheet passing through the press several times to built up the final image. One of the most valuable items in the Art Alder acquisition is a progressive series of proofs for a multi-coloured label for the Niagara Falls Canning Co. By 1940, stone lithography and the transfer process had been superseded in most applications by offset lithography, in which the image carrier was a flexible metal plate wrapped around an impression cylinder. Image transfer to the plate by 1940 was largely by photographic means. Some of the label specimens we are acquiring clearly are the product of this photographic process.
Context Canada
Many of the plates, proofs, labels and posters were produced for Canada's growing number of manufacturers in everything from farm implements, to preserved food, pharmaceuticals and musical instruments. Some of these, like Massey Harris, were once giants. Others may have left no other traces than the plate and proof for a cheque, receipt or letterhead. The artifacts and print specimens represent the output of one of the fastest growing industries in this period: printing and graphic arts. Not only was printing growing rapidly as a sector, it was also subdividing into specialized segments. The engraving and lithography trades, whose processes excelled at reproducing creative imagery, colour, and decorative calligraphy, commanded the market for stationery, packaging, posters, promotional calendars and catalogue covers. The collection attests to the emergence of a new market, consumer goods, and a new industry, advertising. During this period, the role of the household as a centre of production was steadily weakened as its members became implicated in the labour market. As members became increasingly dependent on cash employment, household needs like clothing and food had to be met by purchasing goods. At the same time manufacturers, pressed by competition, continually sought both to expand their markets and reduce their costs through mass production. National markets for consumer goods thus emerged. The printing and publishing industry played a key role in this process through advertising and packaging.
Description
Lithographed print and image on paper with off-white, yellow, red, green and blue colours.
Number of Parts
1
Artifact Finish
Lithographed print and image on paper with off-white, yellow, red, green and blue colours.
Model AKA
Standard Quality
Artifact Markings
"FOUNTAIN/ BRAND/ TOMATOES/ STANDARD/ QUALITY/ ROBERTSON/ PACKERS/ COLBORNE/ ONT." printed on label. "CANADA/ 28/ FLUID OZS/ SIZE." printed within circular border on label. " 560 401 x 411" and "MILLER LITHO. CO. LTD. TORONTO, CANADA" printed on selvage edge.
Artifact Decoration
Stylized illustration of whole tomatoes.
Artifact Missing
None.
Group 1
Printing
Category 1
Printed specimens
Group 2
Agriculture
Category 2
Merchandising
Subcategory 2
Packaging
Material
paper
Length
32.5 cm
Width
11.0 cm
Subject(s)
Fruit processing plants
Businesses
Colborne, Ontario
Local identifier
83ar
Language of Item
English
Geographic Coverage
Contact
Cramahe Township Public Library
Email:cramlib@cramahetownship.ca
Website:
http://www.cramahelibrary.ca
Agency street/mail address:
6 King Street West
PO Box 190
Colborne, ON K0K 1S0 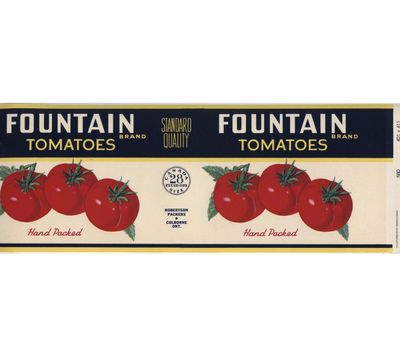