I was born in a house located at 112 Lindsay St. S., just this side of the tracks. As a result, in the four years I lived there, I grew to love trains.

I made mention some time ago about the cinders getting in the eyes of people who lived nearby. However, it was worth it to see the big trains, or "iron horses" as our Native friends called them, roll by both morning and night. Freight trains traveled in between times carrying cargo of everything from wheat to steel.

As I grew older, I used to love to go to the CNR railway station on located at William and Durham streets just to see the big engine slow down and finally come to a complete stop. After a couple of minutes or so, the passengers would slowly disembark after the conductor set a small stool for them to step on and would offer an arm to the ladies to ensure their safe landing on the station platform. As for the gents, being macho, they never seemed to need any assistance.

I recall the huge baggage wagon that a station attendant would pull up to the baggage car where luggage would begin to be unloaded. Wagon was an excellent name for it because it always reminded me of a child's wagon, although the tongue was so much larger and instead of having rubber tires covering the wheel rim, they were plain steel with no coverings and made a lot of noise. All the while many passengers would await this task to be completed in the railway station.

Many passengers chose to remain standing in the station perchance they take a seat and have a lovely dress or suit tarnished by the soot that so finely covered the seats and benches.

Naturally, while these duties were being performed, the local taxi drivers were patiently waiting for fares and would readily pick up the luggage for their passengers. In addition, when it was the evening train arriving from Toronto, local newspaper vendors would pick up the late edition of the Toronto Evening Telegram and the Toronto Star and rush them to their cigar stores for customers who preferred the late edition of these papers.

I can still see, what appeared to me to be, a monstrous blackboard attached to the station wall where the station manager would list the date, departures, arrivals and the locomotive's number. Of course, back in those days, they didn't use military, but straight old AM/PM times.

Once we moved to the east ward, I used to slip down to the CPR station on Caroline Street and watch identical activities take place there.

Another exciting thing to watch was when the railway men would fill the train's boiler with water. It took so much, one wondered if they would have enough water to fill it. Many folks today still speak of the "romantic days of the railroad! 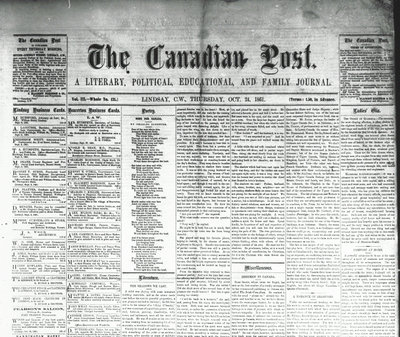